The Spanish FIA Formula 2 team run by former Formula One driver Adrian Campos Announced back in February that they will be retaining the services of highly-rated driver Jack Aitken and that his partner for the season would be Brazilian newcomer Guilherme Samaia.

Commenting on their line up the team announced on its website with such a strong driver line-up with the team focusing on being competitive from the first race for a title bid.

Campos has been in motorsport for near 30 years across various disciplines having been founded in 1997. Based some 40km outside Valencia they have had some familiar names race for them such as Fernando Alonso, Sergio Perez, Antonio Garcia, Lucas Di Grassi and Vitaly Petrov “ just to name a few who have been racing with Campos Racing team

Since the reformatted FIA Formula 2 Championship Campos has not really come as close as they would have wished in the Team Championship.

In 2017 they finished 9th with Ralph Boschung as their lead driver who finished that season overall 19th in the Drivers Championship with a string of Drivers stepping in during the season such as Roberto Merhi, Alex Palou and current F1 driver Lando Norris.Â  Overall though all of those drivers yielded zero wins.

The 2018 season did have a more settled look to it with current F2 drivers Luca Ghiotto and Roy Nissany leading their charge to a 7th place finish in the overall team standings. Unfortunately despite a consistent line up the team still didnâ€™t manage a race win with Ghiotto finishing 8th in the driver’s championship.

Last year, Jack Aitken and the Campos team really made some solid ground up and over Aitken’s 20 races he achieved 3 wins and 2 fastest laps for both team and driver to finish 5th overall in their respective championships.

In his first season in Formula 2 he raced with ART GP, partnering eventual Champion George Russell but maybe fell short of his own expectations vs his teammate in that first season. Aitken has always had good pace and is considered highly by most on the grid.

He would have been aiming higher in his sophomore year in a new team. The 2019 season saw the British driver race for Campos, scoring nearly triple the prior years points and finishing the season fifth in the driver championship with 159 points.

The season despite not being a title push was a strong indication that he could back up those who think he has the ability to make it into Formula 1. Jack’s performances really helped the team achieve great things last year and gave most race fan’s some real top level highlights, most dramatic of all being a last lap overtake to win his home Grand Prix in Silverstone.

For the 2020 season, Both Campos and Aitken will hope to build on this progress and try to mount a challenge in both Team and Drivers championships.

Aitken reiterated this ahead of the season Last year we did a great job by winning three times. This year we will carry on that work by going for even more wins and the Championship itself. (Credit: camposracing.com)

For many race fans who don”t follow the junior championships, Brazilian Guilherme Samaia may be somewhat of an unknown quantity.

The 23-year-old is from the famous Brazilian racing city of Sao Paulo and started like most in karting back in 2012.

While racing junior championships in Brazil he has won titles nationally with some really dominant seasons taking huge championship leads. In the Brazilian F3 light series winning the title, some 30 points ahead of his next competitor and more recently in 2017 winning nearly all the races of the 16 race championship to finish a huge 87 points ahead of the second-placed driver.

Following this success, the time came to move to Europe and initially with the BRDC Formula 3 Championship and the onto the Euroformula Open with Carlin in 2018 and MP Motorsport in 2018. Although he has yet to translate his pace from Brazil into the European formula’s he will no doubt be out to make his mark as a rookie in 2020.

He impressed in the post-season test in Abu Dhabi in December 2019 and will be looking forward to proceedings in Austria.

“Joining F2 is a major step on my career, I feel ready to face the challenges it will bring me” Samaia said.

Talking about Campos as a team, ‘I’m really happy to join Campos Racing team for the 2020 Formula 2 season. I feel I couldn’t be in a better place to come into the championship. Campos Racing showed strong and solid results last year” (Credit: camposracing.com)

Can Campos Racing take another step towards mounting a serious title challenge this year with this driver line up? Let us know what you think on Twitter @F2inside 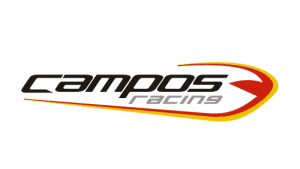