The Dutch Grand Prix at Zandvoort has been cancelled officially for 2020. This means we will all have to wait another year for sure until we can see those famous banked corners in Formula 2.

As we are all aware the postponement has comes following the COVID-19 pandemic, while other nations are looking for a way to schedule races behind closed doors the organisers said on Thursday that they would rather wait until next year to assess the situation.

Dutch Grand Prix sports director Jan Lammers said the possibility of holding their first race behind closed doors and without spectators was not an option.

“We were completely ready for this first race and we still are, he told the race website.

“We and Formula One have investigated the potential to hold a rescheduled race this year without spectators, but we would like to celebrate this moment, the return of Formula One in Zandvoort, together with our racing fans in the Netherlands.

“We ask everyone to be patient. I had to look forward to it for 35 years, so I can wait another year.

The excitement was building for the new circuit worldwide. This was driven by the popularity of Red bull’s Dutch driver Max Verstappen and the expected orange army that would have been in attendance.

The circuit in recent years had been used more for other types of racing but the organisers at Zandvoort had spent in excess of 15 million euros to modernise it for modern open wheel racing.

The layout was expected to be exciting more for the pressure on the machinery rather than the wheel to wheel racing as the design included two banked curves which are not a common feature of most modern circuits.

Such was the demand that all 300,000 tickets had been sold way in advance as locals clamoured to see Red Bull’s Verstappen, the only Dutch driver to win a Formula One championship grand prix, make his home debut.

This official decision on the event means four of the 2020 season’s planned 22 races have now been cancelled – Australia, Monaco and France being the others.

The Formula One group hopes to start-up in Austria with two races behind closed doors and in carefully controlled conditions from the weekend of 3-5 July. Although it has not been officially commented, we are expecting that F2 and F3 will be back involved in the race scheduling.

What do you think of the latest announcements? Do you think we are ready for the sport to return? Comment @F2inside on Twitter 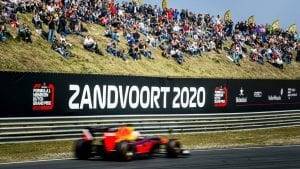