With FIA Formula 2 now ready to begin, we will start our season the right way, with some bold predictions, and see how they age at the end of the season.

To be fair to our writers and staff here at InsideF2 virtual towers, they did a decent job last year predicting stand out drivers.

Let’s see who we have selected this time around as they pick a Team and Driver Champion for the 2021 season.

I firmly believe Prema will be the team to beat this year. In Robert Shwartzman and Oscar Piastri, they have two F1-worthy drivers. Shwartzman, despite dropping off towards the end of the season, showed himself to be one-to-watch and Piastri’s path to the Formula 3 drivers’ title displayed his maturity and strategic thinking, crucial qualities when fighting for the title. With a line up that is consistent and quick, who are already well-adjusted to the team, it could be third time a charm for the Italian outfit.

I believe ART’s Christian Lundgaard will be in the driving seat to take home the FIA Formula 2 title. He showed incredible pace, thoroughly outperforming his team mate, but struggled with consistency in the middle of his campaign. His late charge at the Silverstone Sprint Race and his dominant Sprint Race victory in Mugello, showed that he has the qualities a champion needs. With the Danish driver topping pre-season testing as well, I’ve got high hopes for the Alpine junior and I reckon we could see him in F1 in 2022.

With the team being in possession of last year’s championship trophy, my money’s on Prema to win a back-to-back title. I believe they’ll carry the momentum and jubilant spirits from last season’s success into this.

With Robert Shwartzman at the helm, alongside new rookie teammate, and current Formula 3 champion, Oscar Pastri, the Italian based outfit will be motivated to start the season strong.

I believe that Ticktum may have the car underneath him to take the upper hand now that he’s joined the Carlin team.

With a Formula 2 season under his belt, and continued backing from the Williams Driver Academy,  the Brit is most definitely on the right track to succeed in his campaign to reach the heights of Formula 1.

He started last season strong though bad luck and technical regulations brought his championship hopes to an end.

Despite the heavy disappointment, not much can keep this London boy down. He’s tenacious and relentless.

Ticktum’s radio transmissions aren’t always for the faint-hearted. Nevertheless, they accentuate his warrior spirit and no-nonsense attitude; the same attributes that are found in almost every Formula 1 world champion that’s ever been crowned.

A new seasons and a new dawn for Formula 2, but sadly, for the rest of the competition, the same result with PREMA doing the double with Robert Shwartzman my prediction to become champion after a superb rookie season.

If he improves his qualifying performances which cost him points in his rookie campaign, Shwartzman will be unbeatable in his second F2 season with the Russian’s racecraft and overall pace making him one of the best.

I am going for Theo Pourchaire, who will continue his meteoric rise.

Pourchaire already has the advantage of some Formula 2 experience with HWA, which only can do him a world of good in what will only be his fourth season of car racing.

With a record number of race winners in 2020 we could see many more surprises this season.

My pick for the title this year will be Robert Shwartzman. He was the 2019 Formula 3 champion and has already shown his Formula 2 intentions in the 2020 season. He tasted success early on in Formula 2 and with him staying at Prema for a second season, should have the consistency to be the man to beat.

I believe the challengers to Shwartzman will be the Uni-Virtuosi duo of Guanyu Zhou and Felipe Drugovich. Zhou won the Anthoine Hubert award for being the top rookie in 2019 and he will want to prove this year that he is no longer a rookie and finally claim that sought after title. Drugovich claimed three victories in 2020 and will want to visit the podium regularly this year.

After an exciting 2020 season that went down to the wire, I think we are in for another thrilling F2 title fight this year.

My pick for the 2021 Teams Championship is Prema. The Italian team deservedly took last years crown and with Prema having a strong 2021 lineup of Robert Shwartzman and F3 champion Oscar Piastri, I’m predicting them to do the same this year. Especially with Robert Shwartzmans extra year of Formula 2 experience he could push Prema to yet another Teams title. Prema also welcomes a new driver to the team in the form of F3 champion Oscar Piastri, the young Australian will certainly be one to watch in 2021.

In my view, the F2 Champion will be Robert Shwartzman. The 21 year old drove brilliantly last year in his debut F2 campaign, the stability of staying with Prema will only help his cause too. The Ferrari junior really stood out to me last year as an old head on young shoulders pulling off some magnificent victories in Hungary and Belgium to name a couple. I’m sure Robert will build on this success in 2021.

It’s a big shout, but considering how well he performed in his rookie season, it does have merit. He had a mathematical chance of clinching the title coming into the final round of 2020. He had an impressive start to the season and led the championship at various points. But by the last quarter of the season, he fell to 4th after non-scores in Mugello and Sochi. Despite a strong finish to the season, he would ultimately finish 4th and 38 points behind teammate and champion Mick Schumacher.

The 2019 Formula 3 champion has a second bite of the Formula 2 cherry and has every opportunity to clinch this year’s title. This being due to Shwartzman being retained by reigning champions Prema and he’s had a year’s experience in F2 machinery.

On the matter of Teams’ champion, this shout feels more straightforward due to the strength of Prema’s lineup. Retaining Shwartzman and hiring reigning Formula 3 champion Oscar Piastri is a statement of intent for Rene Rosin’s squad. No doubt the team’s title credentials this year looks very good.

Overall, with a strong lineup and a well-run team, it looks like Prema would be fighting at the sharp end once again.

Following comments and pace from testing, I think  Dan Ticktum could be champion at the end of 2021. Ticktum showed his talent many times last season, despite DAMS not always looking competitive. He also topped two pre-season testing sessions (Day 1, AM and Day 2, PM) During the test he told the media that he is enjoying the ‘relaxed‘  atmosphere at Carlin.

Although Carlin look strong, I think Prema will come out ahead in the teams’ standing this year. After a solid 2020, I believe the team will have the right resources to build off, especially with their driver line-up. Robert Shwartzman has proved his speed year after year and did well in F2 last year as well. Although Piastri is talented, I think there are too many unbelievably quick drivers returning this year, so as a rookie, I think it will be tough for him to fight for the drivers’ title. However, I do think he has the pace to support the team in their fight for the teams’ championship.

Prema looks to have the strongest line up for 2021, giving them the best chance of claiming the teams’ championship. The Italian team lost the reigning Formula 2 Champion but have replaced him with the F3 champion, who should be just as capable of scoring points as his new teammate.

Prema looked strong last year, claiming both titles, and should carry that momentum forward to this year. With only one change in the driver lineup, it should help give Prema consistency for the fight.

Despite Zhou entering his third year in F2, he has shown pace claiming poles and podiums in both previous seasons. He claimed his first win in the series last year, and that momentum should stay with him throughout the season.

Zhou knows UNI-Virtuosi well as he has spent his time in F2 with that team which should pay off with a team around him that he is comfortable with.

For this year, I expect it to be a close call in the Teams’ Championship, however I think UNI-Virtuosi will come out as champions. Their lineup of Zhou & Drugovich is one of the strongest on the grid, both of them being proven race winners & pole sitters in 2020. I reckon it won’t be easy for them, facing fierce competition from both ART & Prema, however the experience of the duo will help give them the competitive advantage. Plus they do say third time’s a charm, so with Virtuosi heading into their third year, this could well be their moment of glory.

As for the drivers champion, I’ve gone a little different, backing Dan Ticktum for the title. Carlin have been consistently at the front since their debut in 2018, winning races every year, and I see this year being no different. However what makes the difference is Ticktum’s experience, as a proven race winner, and if he can capitalise on his raw pace then there will be no stopping him. It won’t be easy, given the strength of the field, and I can see the fight going to the final round, however in the end I feel Ticktum will write his name into history as a Formula 2 champion.

Take note of these, we will be back in December to see how these F2 mystics got on! 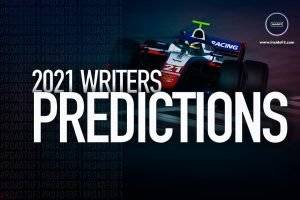