Théo Pourchaire is a man who looks like he’s won the FIA Formula 2 Championship every time he wins a race, and told insideF2 and other selected media today that 21 points is a perfect way to go into the holidays.

The season has been a consistent one for Championship leader, Felipe Drugovich, and whilst Pourchaire came into 2022 as the favourite, the ART driver’s season hasn’t gone to plan, after suffering two retirements and finishing out of the points four times. Despite this, Pourchaire has stayed within touching distance of the top spot, and following last weekend’s P2 in Le Castellet, and today’s Feature Race win, the Frenchman has found himself back in contention, just 21 points behind the lead.

“This Championship is going to be tight, Felipe is very consistent today. I think he had some issues. I don’t know why exactly, maybe he struggled with tyre degradation, Let’s see, I’m not very focussed on the Championship to be honest. 21 points is still a big gap – less than one Feature Race win, but still a big gap, and it’s a long way to go for races it’s quite huge.”

Towards the end of the Feature Race Charouz driver Enzo Fittipaldi was catching Pourchaire.

“I think Enzo was faster than me [after the pit stops] to be honest. At one point I picked up some pace, but in the end I was on the edge of losing the car on every corner, we did the job, that’s the most important, and big thanks to the team for that.

“It was a very very stressful race. When you have a car a bit quicker than you right behind you, around two seconds. I could see him(!) in the mirrors, in the exit of the last corner and the exit of Turn 1 every lap, but I was managing that. I’m very happy with that, I didn’t do any mistakes, so that’s good.”

Going into the summer break on a high is always a bonus and puts drivers on the front foot when returning.

“This race is just before the holidays, it’s a perfect way to go on a break. The car was good. We struggled a bit with the balance, we were not the fastest car on track but we did a very good job in Turn 1, and the team did a good strategy, and pit stop as well. And my out lap was good, so I maximised everything, and in the end I won that race, and it was amazing.

“21 is my number, my favourite number. That’s perfect way to go on holidays. And, it’s my birthday in August, so everything’s good today!” 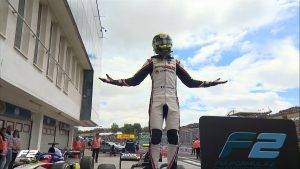