In a season that almost never was, Mick Schumacher’s Formula 2 title campaign was certainly worth the wait.

And prove himself he certainly did.

His season started well after qualifying in fifth, whilst the Feature Race saw him battle with Callum Ilott for the victory.

However, a rare mistake saw the Prema driver nearly collide with the barrier to finish in 11th and he took seventh in the Sprint Race.

The second weekend in Austria saw him convert ninth in qualifying to fourth in the Feature Race.

However, luck was not on his side in the Sprint Race. In a rather bizarre incident, his fire extinguisher accidentally went off and he was forced to retire.

The Hungaroring, where he achieved his maiden F2 win last year, suited him once again after he achieved third in the Feature Race and took another podium in the Sprint Race.

The double header in Britain started promisingly with third in qualifying and a scorching start off the line saw him seize the race lead. However, he eventually finished in ninth and could only manage 14th in the Sprint Race.

The second weekend at Silverstone provided mixed emotions for Schumacher. An ambitious move around the outside of Shwartzman for the lead of the Sprint Race with two laps to go resulted in contact.

Schumacher managed to continue to finish second, but his team mate dropped out of the top 10.

His consistency continued in Spain with sixth and third place finishes.

He stayed out of the drama in the Feature Race to finish third. Prema then achieved a 1-2 finish in the Sprint Race, with Schumacher nine seconds behind Shwartzman.

Six podiums so far saw him climb to fourth in the drivers’ standings, 26 points behind the championship leader.

The pressure was on heading into the weekend at Monza, but he did not get off to the greatest start after triggering a red flag in qualifying.

Schumacher then stormed his way to his first victory of the season in the Feature Race. A breathtaking getaway saw him jump up to second from seventh.

After race leader Callum Ilott stalled in the pits, he was able to take home a richly deserved win.

Mugello saw the championship turn in Schumacher’s favour. Despite a collision with Guanyu Zhou and Jack Aitken in the Feature Race, he managed to finish sixth and take the championship lead for the first time.

Sochi saw him match his best qualifying position of the season in third, but things only got better from there for the German driver.

A strong start enabled him to jump Jehan Daruvala for second. Towards the end of the race, he showed us his spectacular overtaking skills with a daring out-breaking manoeuvre on Yuki Tsunoda for the victory.

Blistering starts were a recurring feature of his campaign and the Sprint Race in Sochi was no different, with him diving up the field from eighth to fourth by Turn 2 before boldly dispatching Aitken for third.

The penultimate weekend in Bahrain did not start well for Schumacher, after his main title rival Ilott achieved his fifth pole position of the season whilst he started in 10th.

He set off on a superb recovery drive to fourth in the Feature Race, whilst being cautious when battling Daruvala for third and missing out on his 11th podium of the season.

He was lucky to avoid a collision in the Sprint Race after locking up at Turn 10. Ilott tried to dive down the inside of him, locking up  and colliding with Daruvala.

The season finale on the Bahrain Outer Loop was nothing short of dramatic.

A collision with Roy Nissany in qualifying saw him start in 18th.

However he recovered on Saturday, managing to finish sixth with the two additional points for fastest lap.

Consequently, he held a 14 point lead into the final Sprint Race and only need sixth or higher to seal the title.

Yet the race seemed to go from a fairytale to a nightmare in a matter of seconds.

A heavy lockup saw him narrowly avoid a collision with Ticktum and the resulting flat spot saw him forced to pit and drop down the order to 20th.

However, as Ilott was unable to score points, Schumacher won the title despite finishing in 18th after racking up two wins and 10 podiums across the season.

Schumacher’s Formula 2 title winning season is hallmarked by his unbelievable starts, dynamic overtakes and a maturity that far belies his 21 years.

Speaking about his season, he said: “Obviously, the start of the season wasn’t as we planned. We didn’t put everything together and that was mainly from my side.

“I think that the team was great all year long. But then, step by step, the podiums started rolling in, and those two victories as well.”

With his Formula 1 debut with Haas for 2021 and a possible Ferrari seat on the horizon, Mick Schumacher has stepped out of the shadows of his father’s legacy and proved he is more than just the son of the seven-time Formula 1 champion.

And if he gets the chance to showcase his talents as he has this year, I don’t think it’ll be too long before we see our 2020 Formula 2 champion as a Formula 1 world champion too. 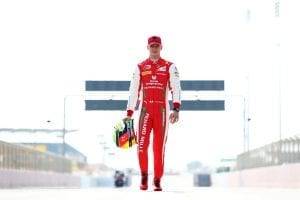