A “Demoralising” Feature Race for PREMA in Spain

A “Demoralising” Feature Race for PREMA in Spain

PREMA Racing experienced a tough Feature Race in Barcelona as the FIA Formula 2 returned to Spain for the first time since 2020.

Jehan Daruvala started the race fourth but was forced to retire early because of an electronic issue.

The Indian driver started on the harder prime tyres and hoped to gain a strategic advantage by pitting later than the others before fighting back on the softer tyres.

Unfortunately, he and his team never found out how that choice would work because of an electronic problem causing him to retire from the race.

Daruvala said: “We started on primes, we were the only [ones] in the top-10, and I think we were in a good position, top-5 at that time. Then I lost the electronics, and the steering blacked out.

“I tried to reset the car with the master switch but it didn’t come back. It’s a shame. It’s obviously a race of woulda shoulda coulda, but I think we had a good pace, and the strategy would have worked out seeing how quickly the other drivers came up on the options.

“It’s a bit demoralising to see, but that’s racing. We will fire back next week and see what we can do.”

The Norwegian was forced to pit for a new front wing after being involved in contact early in the race and was later penalised five seconds for his involvement in that incident.

Hauger said: “I made contact in the first lap and I had to pit. I struggled a bit with the grip on prime tyres. I switched to options quite early on and I tried to be more careful at the beginning and they came more towards the end.

“The pace was not too bad in the final laps, but it was obviously way too late with the five-second penalty as well. For today it was a frustrating weekend, we’ll look at what we have to do next week.”

The PREMA duo will be back racing in Monaco, hoping for better luck and more points than their return from Spain. 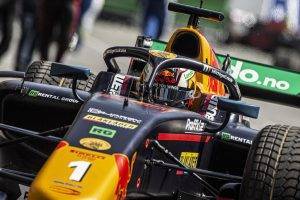