A Double Podium in Saudi Arabia for PREMA

A Double Podium in Saudi Arabia for PREMA

FIA Formula 2 Teams’ Championship leaders,  PREMA Racing, demonstrated their class on Saturday in Jeddah when they took a double podium in the second Sprint Race.

Oscar Piastri took a fourth win of the season with team mate, Robert Shwartzman, classified as third after penalties were applied to other drivers.

But it wasn’t all good for the championship leader, Piastri, as he had a rough Sprint Race 1 where he only managed to finish eighth after spending most of the race battling with the cars around him.

But that had him lining up third for the second Sprint Race of the day, and Piastri quickly gained a position off the start.

It was then a waiting game for the Australian. Piastri knew he didn’t have to make a stupid move thanks to the leader having a five-second penalty for leaving the track and gaining an advantage.

It was a bold move into turn one that eventually got Piastri the lead late in the race, taking the fastest lap on his way to victory.

The Alpine Academy Driver said: “After scoring P8 in a very eventful race 1, and finishing in one piece with a good starting position for the second race, we managed to take both the win and the fastest lap”

“Starting in P3, I got past Viscaal at turn 2, and then, after that, I tried to pass Daruvala. He was really quick at the beginning until he locked up at a restart.

“I knew his tyres were going to be pretty wrecked after that.

“I waited, knowing he had a five-second time penalty, because I still wanted to pass him on track, as I knew I was quicker, and two points for the fastest lap would have been nice.

“Eventually, I made it and took P1 and the bonus points.”

Robert Shwartzman joined Piastri on the podium to make it a double podium for PREMA Racing, making it two top-five finishes for both races.

The first Sprint Race had the Russian starting from ninth, one place ahead of his team mate, and he fought his way through the field and into fifth.

Shwartzman continued with his pace during the second race of the weekend, where he made some great overtakes.

In the end, it was a couple of penalties for drivers in front and a late safety car keeping the field close together that gifted the Ferrari Academy Driver third.

Shwartzman said: “In race 1, we scored P5 among a lot of fighting and action as this is a very fun track to drive and race.

“It was quite hard, but overall, I’m happy: we had an extremely good pace and also took the fastest lap.

“In race 2, the pace was strong again. I tried my best to get through Viscaal, but he was defending very well and was also pretty aggressive, so I didn’t want to take the risk.

“In addition, I knew that the car in front had a five-second penalty.

“I stayed calm and tried to get an opportunity to pass, but he was always in Lundgaard’s DRS, and that turned out to be difficult.

“Overall, I’m pretty happy, but obviously, the focus is on the main race tomorrow. The goal will be to get a good start and a good opening lap, not make mistakes and gain the lead.

“From there, full attack, look forward and pick up the pace, which we have.

“We must put everything together to hopefully get to the top step of the podium.”

PREMA Racing will be hoping for another double podium during the Feature Race later today when their drivers will start first and second. 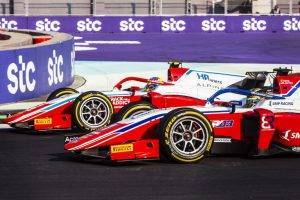