If you’re unfamiliar with Formula 2, yet are intrigued to discover more following reports of the nail-biting 2020 season, then you’ve come to the right place!

Plus, if you’re curious to see how short sprint races and lengthier feature races create a different dynamic, or if you love to spot upcoming talent, then consider Formula 2 your new home.

Set across 24 races, that will be held at eight circuits, this newly formatted 2021 season begins in Bahrain.

A 60 minute feature race, with a mandatory pit stop, will be on held on Sundays, to mirror the main Formula 1 Grand Prix event.

Formula 2 will no longer share the race weekends with Formula 3 as they have done previously.

This will potentially encourage increased viewing of Formula 3 races, and also the W Series that becomes an official support to Formula 1 this season. The ladies will take their opportunity to shine at the same venues as Formula 3.

There are some aspects that remain the same.

Friday still has a 45 minute Free Practice session, and a 30 minute Qualifying session for the Feature Race.

The teams remain unchanged from 2020.

All the cars are identical, therefore, the teams are not constructors, like in Formula 1, but they can contribute to the final touches, and develop their own race strategy and tyre management, to propel their Championship campaign.

For cost-cutting reasons, as a result of the 2020 COVID_19 pandemic, the cars remain the same Dallara F2 2018 chassis, with V6 turbo engine.

Familiar to Formula 1 fans is the DRS system, and Halo.

Unfamiliar, (but a bit exciting) are the 18 inch wheel rims.

The cars handled very differently to what they had done previously and this put all the drivers, whether new or experienced, on an equal footing.

On the whole, the series is an equal fight. Therefore, a teams most influential asset is their driver.

Formula 2 is a petrol-head’s dream, where raw talent and learned skills supersede a machine.

F2 was originally created to be a support series to Formula 1 where driver development is the central focus.

Most drivers become academy members and test drivers within a Formula 1 team to further encourage development and opportunity.

Last season Williams academy member, Jack Aitken, grabbed a golden opportunity to temporarily jump into George Russell’s seat at the Sakhir Grand Prix. He rose to the occasion and was as good as all the seasoned drivers.

2021 sees three Formula 2 drivers graduate into a full-time F1 car. Mick Schumacher and Nikita Mazepin have joined the Haas team, and Carlin’s Yuki Tsunoda has been given the chance to shine at Alpha Tauri, alongside the 2016 GP2 Champion, Pierre Gasly.

Helmut Marko sang the praises of Tsunoda last season, and it was no surprise when he was offered a promotion into Formula 1.

While these three drivers may not yet be frequently spoken about in the Formula 1 world, it won’t take them long to become household names.

Recent Formula 2 Graduates, Russell, Lando Norris, Alex Albon, and Charles Leclerc have brought with them a thrilling anticipation to the emergence of the rookie.

The FIA’s ladder project to nurture a driver through the formulas was exceptionally noteworthy last season when an abundance of rookie talent simultaneously emerged.

Taking four wins out of the first eight races, the rookies got off to a great start.

Robert Shwartzman made the first big impression. The Russian seemed unstoppable in the early part of the season.

Though it was Tsunoda who finished strong, finishing third in the Drivers’ Championship, just 15 points behind Champion, Schumacher – Thus being the well deserved recipient of the Anthoine Hubert Award.

Schumacher had already secured his seat at Haas for the 2021 season. Becoming the Drivers’ Champion demonstrated to the world why he’d been chosen for promotion.

The young German has one of the most famous fathers in motor racing history. But don’t be mistaken with thinking he’s got to where he is because of his name. He’s earned his stripes and his achievements are his own doing.

Whilst some would have liked to have seen Callum Ilott become Schumacher’s teammate at Haas, all is not lost for the Brit. He’s secured a place as Ferrari’s test driver in 2021.

Ilott is a product of the elite Ferrari Driver Academy and is now following in Leclerc’s footsteps into the prancing horse – the ultimate prize in the academy’s programme.

Because of the success of both Schumacher and Shwartzman, their team, PREMA, secured the 2020 Team Championship.

The Italian outfits 2021 season looks set to be another strong one, as they retain Shwartzman’s services, pairing him with last year’s Formula 3 Champion, Oscar Piastri.

Dan Ticktum makes a move to Carlin from DAMS, while Marcus Armstrong makes the switch into the French based team. Felipe Drugovich leaves MP to join UNI-Virtuosi.

Also graduating from Formula 3 are Liam Lawson, Théo Pourchaire, Lirim Zendeli, Richard Verschoor, David Beckmann, Bent Viscaal, and Jüri Vips (who made a brief appearance for DAMS in 2020 when he sat in for an injured Sean Gelael).

Most are familiar names if you watched the 2020 Esports series.

The other rookies include, Gianluca Petecof, Alessio Deledda, and Matteo Nannini.

Ralph Boschung makes a full-time return with Campos after filling in for Jack Aitken in Sakhir, while the British-Korean driver fulfilled his Williams duties.

If 2020 is anything to go by this season will be a thrilling spectacle that shouldn’t be missed.

We hope you will join us at insideF2 for race weekend previews, live race-blogs, and post-race reports, plus many features in between that will keep you in touch with drivers, teams and the 2021 Formula 2 Championship. 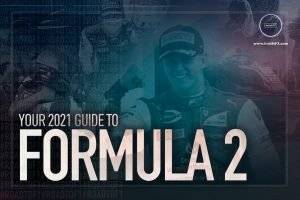