A Full Season with Campos for Olli Caldwell

A Full Season with Campos for Olli Caldwell

Olli Caldwell has announced a full-time seat with the Campos team, after driving the last two races of the 2021 season for the Spanish outfit.

“I get on really well with Campos Racing and especially with Ralph [Boschung]. The car is looking very strong and I think we can definitely achieve some very good results this year, I can’t wait to get going!.”

Adrián Campos added, “Despite the short time that we have been working together, the sensations cannot be better. Olli has adapted very well to the team and to the car and we are sure that a very good year awaits us. Olli has the instinct, perseverance and intelligence to continue growing as a driver and at Campos Racing we are going to give him all the tools to do so.”

Olli’s most successful single-seater campaign was in the 2018 Italian Formula 4 series, where he finished in third place, for PREMA Racing – securing 11 podiums, just 41 points behind Champion, Enzo Fittipaldi.

The Brit finished his Formula 3 season with PREMA in a respectable P8, and found himself hopping into the Campos car for the final two rounds of the F2 season in Jeddah and Abu Dhabi, after taking David Beckmann’s vacated seat.

Caldwell brought the car home in all six races… an impressive feat when taking into consideration the incidents that occurred at the Jeddah Corniche.

Not only is it great news for the Brit regarding a Formula 2 seat for this season, Olli has been offered a much sought-after place with the Alpine Academy, recently participating in his first training camp with the team, in Tenerife:

“I’m really excited to join the Academy as this is one of the biggest steps in my career so far. All the support that comes with it does add a bit of pressure, but that’s good pressure to have in order to keep pushing. I can’t wait to get started and I’m looking forward to seeing how I can improve and perform in the years ahead.”

Alpine Academy Director, Mia Sharizman stated, “We are only measured by our success on track and our goal as an Academy is always to win the Championships our drivers are competing in. Olli comes into the Academy after a solid year in F3 where he managed four podium finishes and a race win. We accept it might take a few races for the two of them [Olli and Jack] to adjust to their new surroundings, but we’re confident they will hit the ground running towards the second half of the season.”

“We’re delighted that Olli has been welcomed into Alpine Academy, he has had an impressive junior career so far and we know that he will go from strength to strength with their support and guidance. Joining Campos Racing for 2022 is a brilliant opportunity for Olli as he makes the step up into F2, he has the talent and will have a great team in Campos to push him forward in his rookie year. We can’t wait to see what the future holds.”

With the coaching of the Alpine Academy, plus an established seat in the Formula 2 series, Caldwell has a great opportunity to succeed on his #RoadToF1. 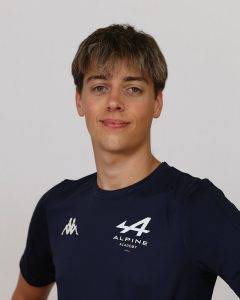