Recently, we caught up with HWA Formula 3 and Formula 2 driver, Jake Hughes, as he looks forward to a continuing future in motorsport.

For four seasons he’s driven in Formula 3, and in 2020 he had the opportunity to jump into the team’s Formula 2 seat, at Sochi.

The Brit participated in the Feature and Sprint Race after Giuliano Alesi switched teams to MP Motorsport and his BWT seat became available.

Jake explained that he was supposed to be participating in a Formula E test that weekend after his Formula 3 season had just come to an end.

Then he got the call for the HWA Formula 2 seat.

On advice from people he knew, including the team he was going to test with, he took the golden opportunity.

Hughes didn’t get the chance to do any sim testing, and only had enough time to sort his visa. It was quite a quick turnaround.

His qualifying position and P12 in Saturday’s Feature Race are even more impressive after learning how quickly it all came about.

He explained the differences of the Formula 2 car. Mostly how the straight line speed is noticeably quicker.

“There’s quite a lot of kick up the backside.” Jake explained.

Despite this, he stated the engine and power is the first thing a driver gets used to.

“The brakes and entry and minimum speed is what you have to find the limit for. It’s carbon brakes, therefore the stopping power is quite impressive compared to a Formula 3 car. In the end it’s still a race car, even after the three-four laps you become confident enough to start pushing.” 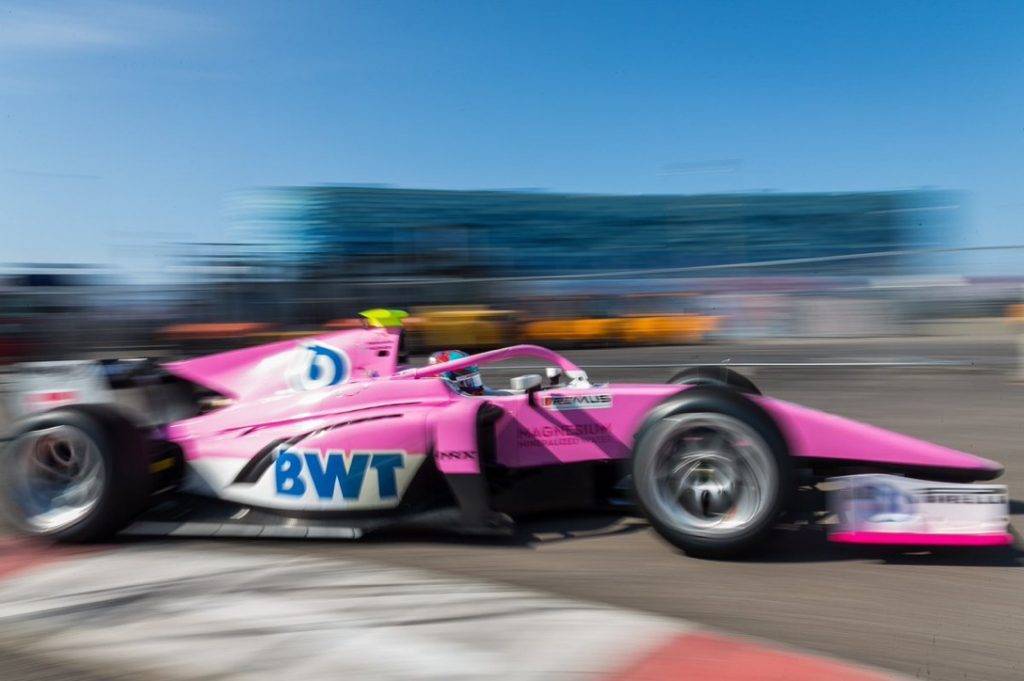 For someone who was thrown in at the deep end, Jake’s P12 was honourable and an achievement to be proud of. Though it is easy to understand that from a racing driver’s point-of-view, he wanted more.

Hughes expressed his gratitude to the HWA Formula 3 outfit for the opportunities given to him over the last two seasons.

“It’s been a pleasure. I’ve really enjoyed working with the team. They’re an extremely professional outfit. I would encourage anyone to go there in the future.”

After not scoring any points in the first half of the season, Jake ended with an awesome 111.5. He accumulated the majority of the points for the team out of all three drivers.

He finished a respectable P7.

The Brit is certain that if the team had the same car at the beginning of the season as they did at the end they could have finished a lot higher in both Drivers’ and Teams’ Championships.

Winning in Monza, Jake confessed it was the strongest year that he’s ever had in racing despite the rollercoaster feel to it all.

He was extremely proud of the level he was performing at and didn’t feel like he had any weak points throughout.

Hughes has come a long way from that first visit to Little Rissington Kart club, where he knew immediately after his experience, racing cars was what he wanted to do with his life.

Despite being older than most racing drivers when they start out, he said that even though he was 16 at the time, the experience made him feel like he was six years old. He was in his element and knew,

“It was only where my life was going to go after that.”

Despite some of his competitors having a nine year advantage on him, Jake went into Formula 4 and won the Championship that rookie year with Lanan Racing – a chassis that George Russell went onto win with the following season.

“It was a good little car.” Jake laughed.

He said he didn’t know the extent of what he’d achieved during that season, and it only became apparent to him when he was nominated for a McLaren Autosport Young Driver Award.

If there was one thing he could change he expressed that he would have believed in himself a little more at that level and stage of his career.

His rookie season in official Formula 3, saw him achieve his first pole position for the team at the second race weekend at Paul Ricard.

Hughes took his first win at the next race in Austria .

He said he had a good level from the car in that first year but it wasn’t enough to fight for the Championship.

Wanting to develop himself within a good team he joined HWA in 2019, and the rest is history.

Jake is very much respected in the paddock. Formula 1 personnel know his name and are aware he participates in the sport because of his raw talent, and not because he is heavily financed.

It’s unfortunate that he doesn’t expect to see himself in single seater cars next year.

The cost of racing in Formula 2 is too great and he expressed that it isn’t feasible at this moment in time to have the support necessary for a role in Formula 2.

He does, however, feel Formula E in some capacity is his next step. He is certain the best thing to do is to target a manufacturer and find a race series to be in.

It feels nonsensical that someone with such a high caliber will not proceed immediately into Formula 2. Great Britain has a wealth of history regarding Formula 1 drivers, and Jake is for certain a future face of British motorsport.

His brief stint in Formula 2 proves he has what it takes.

He remains confident and focussed and is taking the same advice onboard that he’s offered to people following in his footsteps:

“It’s not to get downhearted when people say ‘no’ to you, and nobody wants to listen or help. You have to accept you’ll get told ‘no’ more times than ‘yes’”.

Jakes final message to fans was in gratitude, thanking them for all their support during the last year, and throughout his career in general.

“Hopefully I’ll see you soon. I will be racing next year, I just don’t know what yet. Hopefully you’ll sway away from Formula 3 occasionally to see me.” 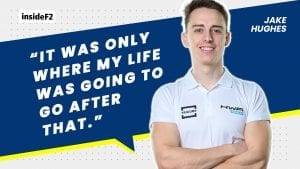