The Track Abandoned Too Soon?

The Track Abandoned Too Soon?

Formula 2 as a championship in its many forms has raced at many places around the world since its inception. Have you ever wondered what happens to the ones that no longer make it to the calendar? Next up in our ‘Abandoned Tracks’ series is Finland’s Keimola Motor Stadium.

The Keimola Motor Stadium was a race track situated in Vantaa, Finland. Although somewhat unknown outside of Finland, many believe the track was abandoned too soon.

The track was founded by one of Finland’s most famous race car drivers Curt Lincoln. It was formally opened on 12 June 1966.

The Finnish circuit consisted of eight turns and the main straight alone was one kilometer in length. The track was 3.3km, with the width ranging from 9-15 metres. The track was perfectly suited to Formula Two car specifications, as the circuit was too short for Formula One cars.

In 1967 Clark claimed victory for Team Lotus, while also completing the fastest lap of the race. He finished ahead of Austrian Jochen Rindt for Roy Winkelmann Racing. Clark’s teammate finished third.

During the 1967 championship, it was common for Formula 1 drivers to take part in the Formula 2 championship. This was due to a grading system that was introduced, which allowed F1 drivers to keep busy on non-race weekends.

Unfortunately, after years of financial difficulties and complaints from local residents due to environmental issues, the track was abandoned in the Autumn of 1978. The video below portrays a lap of the neglected circuit.

During the 1980’s, the deserted circuit became notorious for illegal ‘Moonlight Racers’. After a serious accident between a 16-year-old and a moose, the owner of the track purposely destroyed the asphalt to prevent such races from happening.

The derelict site late became a tire storage facility, which caught fire in 2005 and burned for days according to local newspapers.

Nowadays, the site of the track is a residential area that was built in 2015. The control tower which is the now the only symbol left of the track is set to be refurbished and left as a memoir for the circuit. Have you ever been to a track abandoned by F2?

If so let us know on Twitter. Also, suggest to us which abandoned track you want us to visit next. 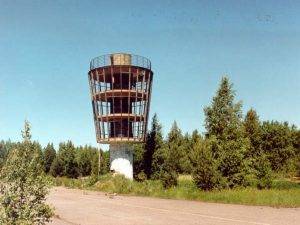