This is it, the final round of the Formula 2 season. 20 races down, 3 to go, with a champion still to crown. Ahead of the Sunset Showdown, here are the statistics you should know.

14  – The amount of points Oscar Piastri needs to score, minimum, to guarantee himself the title regardless of where his rivals finish.

51.5 – The points lead Piastri currently holds at the top of the standings over teammate Robert Shwartzman

15 – The number of different winners of GP2/F2 rounds hosted at Yas Marina, including 6 future Formula 1 drivers!

2 – The most F2 wins for a driver at Yas Marina, shared by both James Calado and Stoffel Vandoorne

41%  – The percentage of races at Yas Marina that have featured the Formula 2 champion, for that year, on the podium

7 – The lowest grid slot for a Yas Marina race winner, achieved by Charles Leclerc in 2017. It’s the only victory at Yas Marina from outside the front 2 rows of the grid.

2.0 – The average grid slot for a Yas Marina race winner

53% – The percentage of wins that have come from pole position, with 76.4% of all victories coming from the front row

110.314s – The amount of time it took Alexander Albon to complete the fastest race lap in Formula 2 at Yas Marina, set during the 2017 Formula 2 weekend.

5.281 km – The length of one lap of Yas Marina’s new configuration

79 – The total number of laps across all 3 Yas Marina races – 23 in both of the Saturday Sprint Races, and 33 in Sunday’s Feature Race.

23 – The number of amazing races we’ll have been treated to in Formula 2’s 2021 season, after the chequered flag falls on Sunday evening.

Will Robert Shwartzman stage the ultimate comeback to deny Oscar Piastri the title, or will Piastri claim the Formula 2 crown for 2021? And who’ll take the honours of the last  2021 race winner? 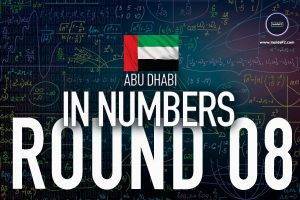