There are many great talent spotters in the world of sport, from Francisco Cornejo who discovered the late Diego Maradona to Cus D’Amato who trained and looked after Mike Tyson.

Adrián Campos would have to be ranked among those in motorsport for his work in the junior ranks, being a trailblazer for Spanish motorsport when it was at an all-time low.

With Campos’s influence and guidance, Spain finally found a star they could call their own in Fernando Alonso. The young talent was taken under Campos’s wing in the early stages of his racing career.

Perhaps the most fitting tribute came from Formula 2 CEO, Bruno Michel, who shared his memories, including the time where he tested the first generation of GP2 car. Michel commented on how he enjoyed every minute of his test alongside 1996 World Champion Damon Hill and Jacques Laffite.

I too have my own memories of Adrián. One of the first pieces I wrote for insideF2 was a joint interview with him, and new signing Guilherme Samaia.

In the interview, we discussed the financial impact of the season being potentially cancelled due to COVID-19.  Campos talked highly of Aitken, proclaiming that he was one of the best to have worked with in the team’s 23 years of competing.

At the end of my interview with Adrián, I had to ask him about the possibility of Campos finally getting onto the Formula 1 grid for the 2021 season. In typical Adrián style he ended the answer to my question of “never say never” – proof as ever that he still wanted another crack at the Formula 1 cherry after the opportunity was snatched from his hands in 2010 when financial issues ended his first Formula 1 dream.

From what I got with my brief interview was a man who was still hungry to climb to the top of single-seater racing and achieve a dream of joining an exclusive club of ex drivers, who have not only raced in Formula 1 but who have become a team owner.

Adárin Campos Suñer was born on the 17th of June 1960 in Alzira, a town just under an hour’s drive from Valencia. His father was the boss of the Avidesa frozen food empire.

Campos began his driving career in Formula 3 in the early 80s after a spell as Spanish radio controller car champion in 1980. Campos had a three-year spell in F3 which included finishing third in the 1985 German Formula 3 Championship.

He would graduate to F3000 in 1986 with Peter Gethin Racing where he endured a torrid first seven rounds of the season, picking up three DNQs and two retirements before moving to Lola Motorsport for the final two rounds. His best finish was sixth in the season finale at Jarama.

Despite a turbulent 1986, Giancarlo Minardi saw something in Campos and gave the Spaniard a Formula 1 drive in the second Minardi alongside Alessandro Nannini in 1987. Campos became the first Spaniard to race in a Grand Prix since Emilio De Villota started the 1977 Austrian Grand Prix.

Campos would manage a best finish of 14th at home in Jerez in what was a nightmare rookie season for the Spaniard that included 12 retirements and two DNS in Spa and Monte Carlo. The former, because of a gearbox failure. The latter, due a concussion caused by a Practice session crash. He picked up a disqualification in Brazil for not starting in the correct grid position.

1988 saw countryman Luis Pérez-Sala join Campos at Minardi but results didn’t pick up and after three DNQs, Campos parted company to be replaced by Pierluigi Martini.

Despite thinking of retirement Campos returned to racing in 1993 in the Spanish Touring Car Championship where he narrowly missed out on the title to Pérez-Sala.

In 1994 lady luck finally shined and Campos won the Championship by 17 points ahead of Alain Ferté. The Spaniard also cameoed in that year’s Touring Car World Cup at Donington Park.

Campos defended his Championship in 1995 before stepping into sports cars in the 1997 Ferrari 333SP. It included an outing at that year’s 24 Hours of Le Mans with Michel Ferté and American billionaire Charlie Nearburg. Unfortunately, the car suffered a fuel system failure after 18 laps, ending the trios’ race.

At the end of 1997, Campos formed his own team and competed in the maiden season of the Open Fortuna by Nissan series, winning both the Drivers’ and Teams’ Championship on their first attempt, with Marc Gené becoming Champion on his way to moving up to Minardi for the following year’s Formula 1 Championship.

Gené would be replaced by 19 year old Fernando Alonso who was also managed by Campos at the time. Campos did the double again with Alonso taking the Championship – he graduated to F3000 and subsequently to Formula 1 with Minardi where he turned Spain into a Formula 1 nation after years of muted enthusiasm by the predominantly bike-loving country.

Campos joined GP2 in 2005 but the first two seasons were a tough period for the Spanish team as they struggled for points.

2007 would see a welcome change in fortunes with the signing of seasoned veteran, Giorgio Pantano, who gave the team their first win in the series at the Feature Race in Magny-Cours, before making back-to-back Feature Race wins at Monza, to finish third in the drivers’ standings.

Vitaly Petrov added to Campos’s cup of joy with a maiden win in the Feature Race at Valencia. A fairytale end to Campos’s third season of GP2.

Campos then received investment from businessman and ex-politician Alejandro Agag for the 2008 season which turned out to be a glorious one. The team won the Constructors’ Championship after securing four wins.

Agag took overall control of the GP2 team in 2009 while Campos had eyes on moving into Formula 1 for the 2010 season.

In June of 2009, Campos’s dream was set to become reality after being one of three entries to be accepted onto the Formula 1 grid for 2010 along with Manor and USF1. Bruno Senna was confirmed to drive for the team in the winter of 2009.

However, financial issues put the team’s future under severe threat before the first race, with the team running well behind schedule and unable to announce Senna’s teammate until days before the season opener.

On February 19th 2010 Campos was forced to relinquish full control of the team to shareholder José Ramón Carabante who would rename the team Hispania for its three underfunded years in Formula 1 – the team struggled to make ends meet. Campos himself was replaced as team principal by Colin Kolles.

The Campos name returned to competitive racing four years later with a quiet return to GP2. They took seventh in the Constructors’ Championship. The season highlight came at Hungary when Arthur Pic won the Feature Race, ending the team’s six-year wait for a GP2 win.

Rio Haryanto gave Campos a vintage year in 2015 with three Sprint Race wins at Bahrain, Austria and Great Britain to catapult the team up to fourth in the Teams’ Championship. The Indonesian was the next Campos junior to graduate to Formula 1 with a drive at Manor the following year.

2016 would see the team finish sixth in the Teams’ Championship. Mitch Evans picked up the only win in Austria as they struggled to keep up with PREMA and ART.

Campos continued in the second tier of motorsport when the series rebranded to Formula 2. However there was little change in results with 2017 and 2018 turning out to be winless years.

The team, however, did give Formula 1 star Lando Norris and IndyCar sensation Alex Palou a run at the tail end of the 2017 season with Palou doing the better of the duo. The Spaniard scored a pair of eighth places in Jerez.

Aitken‘s arrival from ART boosted the team’s fortunes with the British-Korean getting an early win at Baku. Adrián, having the honour of picking up the winner’s trophy, found himself being sprayed with Champagne by the exuberant Aitken.

Silverstone would be Aitken’s second and final top-step for Campos after a superb drive to win at home, much to the delight of the home crowd.

It would sadly be the last time that Campos witnessed his team take victory in Formula 2. 2020 was a tough season that saw Aitken score two more podiums, but he left the team to take up a Williams Grand Prix drive in the Sakhir Grand Prix. He was replaced by Ralph Boschung, who was returning to the team after four years away.

When people look back at the last 16 years of GP2/Formula 2, Adrián Campos will be remembered as a crucial part of the series’ progression, as well as being one of the few teams that have been around the Formula 2 paddock from the beginning.

Adrián’s charisma and charm will forever be missed in the support race paddock for years to come. 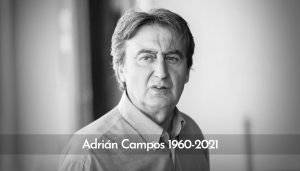