Aitken Gambled at Baku Rather Than Monte Carlo

Aitken Gambled at Baku Rather Than Monte Carlo

Following his return to FIA Formula 2 Jack Aitken took to the streets of Monte Carlo & Baku in what seems to be ‘one-off’ drives with HWA – and impressed the paddock.

In Monaco, he used the race weekend to equip himself with his team & car, and by Baku, he’d already got to grips with everything, turning heads with his speed.

Aitken qualified 14th for the Feature Race, and though he was, “actually a bit disappointed to qualify 14th”. It was HWA’s best qualifying performance of the year.

He felt that, “the top 10 was definitely possible”, still he managed to out-qualify his teammate by 2.5 seconds, who qualified slowest of the 21 runners.

Starting 14th for the first Sprint Race, Aitken felt that it was, “obviously not what I wanted”, after being caught up in a Lap 1 incident and retiring on the spot.

It meant he started on the back row for Sprint Race 2, but put in a strong performance amongst the chaos to finish 12th.

Speaking about the second Sprint Race, Aitken said that, “It went well. We had good pace and we were able to race hard.” – but stated that it was also, “disappointing that we didn’t quite manage to get into the points after our tyres degraded towards the end.” – He finished less than 15 seconds adrift of eighth placed Piastri.

For the Feature Race, however, Aitken decided to try something a little different, despite the fact he claims he’s, “not a gambler by nature!”

His team decided to ‘roll the dice on strategy and start on the medium tire’ – the only driver in the field to make this decision. Before the race even started, Aitken faced a setback, procedural problems causing him to start from the pits, this was no match for the British-Korean driver, who fought back to finish within a second of a points finish.

Reflecting upon the race, Aitken stated, “The gamble nearly worked, because we were up to the effective lead after having started from the pit lane. If we’d had a Safety Car, then who knows what could have happened? But that’s just speculation.”

Speaking of his time with HWA, Aitken said:

“The team has welcomed me with open arms.

“We have made the most of the opportunities that we had together.”

Despite the reality knowing there’s, “nothing else in the pipeline for now”, Aitken claimed that the experience had been, “a real pleasure and I wish them the very best of luck for the rest of the season.”

After these two appearances, Aitken’s next outing is in the GT World Challenge from the 18th to 20th June. These appearances in FIA Formula 2 have certainly caught the paddock’s attention, and this might not be the last time Jack appears in the series.

With the ever changing Formula 2 season, will Aitken will be back again later this year? Will we see other well known faces of Formula 2 coming back like Aitken? 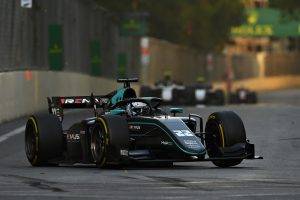