Jack Aitken is ready for another triple-header of Formula 2 rounds, with Spa-Francorchamps this weekend.

Even though the campaign has been challenging at times, both Aitken and his Campos remain optimistic after his double podium finish in Silverstone. The Anglo-Korean is one of only two drivers to have finished on the podium twice in the same weekend, showing the competitiveness of the Formula 2 field.

InsideF2 spoke with Jack this week ahead of the next triple header.

We chatted about the 2020 season and what has been a frantic and unpredictable set of races.

“I definitely think it’s true that there is a lot more unpredictability this year. I have definitely been surprised at some of the results in terms of people I would expected to do well, then have not. Equally, people who have done well on a Saturday but then on a Sunday they may have gone backwards.”

“F2 has always been unpredictable but the new wheels seem to have taken that up a notch.”

We also discussed the triple-header format and what has changed in 2020 in terms of preparations on a race weekend?

“Yeah definitely, it’s been tough. Probably though, the main thing that has changed has been the limited travel we get in and around the race weekend. So for me, with the team being based in Spain I haven’t been able to visit them outside the race weekends at all. We would normally see each other once at least before each race.”

Aitken had qualified inside the top eight in each of the last five rounds but couldn’t keep it up the good form in Spa-Francorchamps and will start the Feature Race down in 17th. Despite the low start in Belgium the Williams reserve driver has proven that he has the speed to fight near the top on a regular basis. So we will look forward to seeing some great overtaking this weekend.

Aitken’s aim is for the podium, even with his low start, if he can get to eighth in the Feature Race he will have a chance to do just that in the reverse grid Sprint Race on Sunday.

Jack said: “It’s obviously difficult – and a little strange – returning to Spa after what happened last year. But I know there are lots of nice gestures planned, and I’ll be paying tribute to Anthoine in my own way as well – as I’m sure everyone will be. In the end, I know that Anthoine would have liked us just to get on with it, with some good and hard racing – and so that’s exactly what we will be doing.

“It’s definitely one of my favourite tracks of the year; really good fun to drive. One of the biggest variables is the weather, so let’s see what happens over the course of the weekend. The biggest challenge is just nailing a perfect lap: the lap is so long that it’s easy to make a mistake and lose time. Tyre degradation is set to be quite heavy too, so it’s going to be a tough one, definitely.

“We found a few things in Silverstone that helped us to a double podium, but then we struggled a bit in Barcelona, so unfortunately [setting up a car] is not the sort of thing that you can just transfer from track to track. Our aim is definitely to learn as much as we can from free practice and be strong from the beginning, which is more or less essential over an F2 weekend. I generally perform well in the wet, so there’s no problem if it rains, but we still have to do a bit of general work on the wet set up.”

“[The triple headers] definitely takes it out of you, but it’s especially tough on the mechanics and the rest of the team: as a driver, you have the easy part. I went on a little break to Wales to unwind after Spain: I did some cycling and got some fresh air and I also did a bit of simulator work at Williams. So now I definitely feel refreshed and recharged, and I’m looking forward to going again this weekend.”

With the Belgian circuit comes the unpredictable weather. It can play a huge role in a Spa weekend as it can rain at one part of the track and be dry in the others. It will down to Jack Aitken to put his foot down and show his overtaking skills or even the wildcard opportun that a wet track could offer. 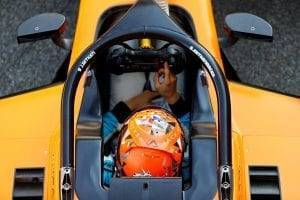