Aitken Returns to F2 with HWA

Aitken Returns to F2 with HWA

Williams test driver Jack Aitken will return to Formula 2 this weekend at Monte Carlo. He will replace Italian Matteo Nannini at HWA Racelab for both the Monaco and Azerbaijan rounds of the championship.

The British-Korean driver who competed for Williams at last year’s Sakhir Grand Prix will return to the Formula 2 paddock after Nannini announced that he would exclusively concentrate on Formula 3 after his main sponsor Celli Spa decided to cease sponsoring Nannini’s dual campaign.

Aitken revealed how he secured his Formula 2 comeback after missing the season opener in Bahrain in a press statement.

“It was actually as much of a surprise to me as it was to most people, but I was asked if I wanted to drive in Monaco and Baku, and after thinking about it for a while, I thought, why not?”

“They are both fantastic driver’s circuits, and they are both real mental challenges: in very different ways. I’ve really enjoyed driving in Monaco and Baku in the past, and I’ve had some good results, including a race win in Baku. So it’s going to be a good experience, and I’m sure I’ll enjoy it.”

Despite being one of the series veterans, Aitken is conscious of the challenges ahead,  as the series returns to the principality after a year away.

“Jumping straight into free practice in Monaco will be tough. It’s been nearly half a year since I last drove a single-seater, but I want to really push and do well nonetheless. There’s a new format in Formula 2 this year with three races and a bigger tire allocation, so that’s going to be really interesting to discover.

“Obviously, Monaco and Baku were off the calendar last year, so there are plenty of question marks. The best thing is just to go into the weekend with no expectations and see what happens.”

“We are delighted to have acquired such a talented driver as Jack. With his wealth of experience in the FIA Formula 2 Championship, he is sure to be a great help to us. In the case of Matteo, we will be focussing on the FIA Formula 3 Championship for the rest of the season. He has already shown his potential in that series at the start of the season.

“We now want to develop that potential and offer Matteo the best possible support on the rest of his career path. It is now important for him to continuously develop with regular successes. We feel this is the right step to sustainably develop and support him in the current phase of his promising career.”

Aitken’s Formula 2 record includes 11 podium finishes and four race wins in the championship. We look forward to seeing Jack back in the car in a couple of days. 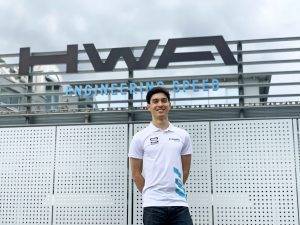