Campos secured a double points finish in Sochi with Jack Aitken despite a massive crash.

It was a mixed weekend at Sochi for Campos as they claimed two points finishes. However, they were also involved in a terrible accident with Aitken during the Sprint Race.

Aitken secured points in both races but was involved in a collision during the Sprint Race. The Anglo-Korean escaped unhurt in a heart-stopping accident after a clash with Luca Ghiotto.

Brazilian Guilherme Samaia also performed quite well in the Feature Race before a first-lap incident in Race 2 forced him to retire.

Aitken and Samaia had a positive start to the weekend and on Friday were lapping competitively. Aitken translated that into a strong qualifying pace in the afternoon. The Brit started the Feature Race eighth while Samaia was further adrift in 22nd.

Aitken made it straight up to fifth on the opening lap of the Feature Race. Samaia also gained positions and moved to 16th following a safety car after an early pile-up.

When the green flags came out, Aitken remained in fifth before taking the lead when the leaders pitted. Despite several attempts by Guanyu Zhou to get past, Aitken led the pack until his pit stop.

Aitken returned in 11th and eventually took the chequered flag in sixth place. Samaia made it to the finish in 16th after keeping a couple of drivers at bay towards the end of the race.

Aitken had another eye-catcher of a start on Sunday, and from third, he moved into second place. Unfortunately, Samaia’s race ended on the first lap after a collision with Jake Hughes left his car damaged.

At the front, Aitken was battling with the leaders. A high-speed incident between Aitken and Luca Ghiotto brought out a red flag on Lap 8. Both cars tangled and crashed into the tyre barrier at the quick Turn 3.

Both drivers walked away unhurt from the crash and as a result of the countback, Aitken finished fourth.

Jack Aitken tweeted after the Sprint Race: “Hi all, thanks for tall the messages, I’m glad to be ok after that, glad Luca is too. A small touch between us earlier in the corner gave me a rear puncture, and the car just started going straight. Just one of them.”

Formula 2 will head to Bahrain for the final two rounds towards the end of the year. 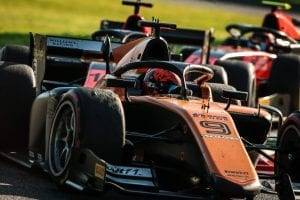