Alesi thinks progression is blocked by Vasseur and Wolff

Alesi thinks progression is blocked by Vasseur and Wolff

Recent news regarding the departure of Giuliano Alesi from FIA Formula 2 has come with a flurry of comments from his father, Formula 1 Grand Prix winner, Jean Alesi.

This is understandable when you look at the costs involved in the sport and his own personal funding of his son’s pathway.

Jean famously sold his own Ferrari F40, worth around €1 million on the used car market to ensure he could place his son for the 2020 season.

Alesi was highly critical that Formula 2 doesn’t have a cost cap, at the time citing that Formula 1 has now introduced this. Its estimated budget in Formula 2 can be as much as €1.8 million for a driver to drive.

Recent news from the likes of Jake Hughes in our own interview here on insideF2.com, Jack Aitken, and recent Ralph Boschung have all confirmed the finances needed to progress up-to Formula 1.

Despite support from driver academies drivers still have to find plenty of money. Alesi Jr was no exception and is no longer part of the Ferarri academy. He will race in Japan in the Super Formula Lights series next season.

Jean told F1i; “If you look at what’s going on in our part of the world in Europe, nothing is a meritocracy”

Speaking to Swiss newspaper Blick and reported by Soymotor.com  the ex-F1 driver said;

“We have no sponsors for 2021, Ferrari has fired him from the Academy and I can no longer raise private funds. I sold my Ferrari F40 myself”

“In 2020 we bet on the wrong team with HWA, we paid more than one million euros. Not all promises were kept. When we switched to MP Motorsport, HWA wanted another 80,000 euros.”

The Frenchman went on to surprisingly point a finger at what he feels is one issue with the system and especially the pathway for younger drivers.

“Today, you need to be a billionaire to buy a Formula 1 team for your son, or you won’t make it to F1. Many seats are blocked by drivers managed by Vasseur and Wolff.”

“Fortunately there is Ferrari, which supplies engines to some F1 teams so they can also supply drivers.”

“Mick Schumacher got his seat in Formula 1 also with his Formula 2 title, but without the support of Maranello it would not have been possible.”

Despite all of the above comments from Alesi, it is no surprise to anyone that motorsport is an expensive sport by nature.

Unlike sports such as football or basketball, where a person can sometimes even play with no field, court, or even regulation ball.

Motorsport is a technical endeavor and requires, machinery, multiple personnel, travel, accommodation, and much much more.

These basic expenses alone make it understandable that a driver would need plenty of cash to play. All of this should be no surprise for Jean Alesi, given this in reality has always been the way of the game, even back in his day.

It seems there will always be a barrier to entry in motorsport at all elite levels, which means discovering a driver with Leo Messi type natural ability in a remote village anywhere in the world is seemingly impossible.

However, food for thought on all of the above valid thoughts and opinions is the example of Mclaren-Mercedes and Lewis Hamilton.

Although Lewis is not a child born from remote placement in a large world, he comes from modest means and was backed by the team from his school uniform to championship status.

Maybe this urge to find the next star or the next Lewis is why the recently developed academies are stockpiling talent and creating a bottleneck in opportunity.

Teams may find the next diamond if they back enough talent. This is very much the Football model of herding prospects.

Remember though, Formula 1, the pinnacle of motorsport only has a limited number of teams and cars. Imagine if Football only had two teams and 22 positions to fill? How many of the world’s best players would never have been seen?

We would love to hear what you think about this, plus the questions we ask regarding #RoadtoF1 and reaching the top of #motorsport.

Let us know in the comments. 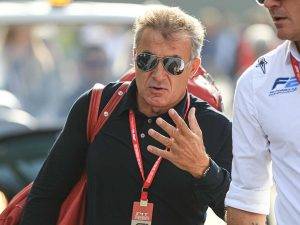