All Change at Williams

All Change at Williams

Following Williams’ recent announcements we’ve taken a look at their history and what it means for their driver academy.

After decades of family ownership the team was recently sold to US investment firm Dorilton Capital.

Yesterday, Claire Williams announced she is to resign from her management role as Deputy Team Principle after this weekend in Monza.

“I have taken the decision to step away from the team in order to allow Dorilton a fresh start as the new owners. It has not been an easy decision but it’s one I believe to be right for all involved. I have been enormously privileged to have grown up in this team and in the wonderful world that is Formula One. I have loved every minute and will be forever grateful for the opportunities it has given me.”

Claire took over as Deputy Team Principal in 2013 after father, Frank Williams stepped down from active duty.

Despite his absence from races he’s remained Team Principal. He too will resign his position as Captain of the ship.

“With the future of the race team now secured, this feels like the appropriate time for us to step away from the sport. As a family we have always prioritised Williams. We have demonstrated that by our recent actions with the Strategic Review process and we believe now is the right time to hand over the reins and give the new owners the opportunity to take the team into the future.”

Both Frank and automotive engineer Patrick Head, raised the British team from the ground, winning multiple Championships – Their most recent with Damon Hill and Jacques Villeneuve in 1996/1997.

Since that final reign of success the team have gradually lost their dominance and stature.

Despite the lack of recent celebrations the team have maintained a key presence in the paddock.

2018 Formula 2 Champion, George Russell, has shown class and maturity during his time with the team.

Ever since Russell was promoted to the elite series in 2019 the British driver has remained professional and cool headed throughout.

I wouldn't be where I am today without Frank and Claire. They gave me my shot in F1, like they have done for so many drivers, engineers, mechanics and countless others over the years. Thank you for everything. We'll keep driving like hell to honour the Williams name.

Canadian driver, Nicholas Latifi who came runner up in the 2019 Formula 2 Drivers’ Championship, and helped DAMS win the Teams’ Championship, graduated to Formula 1 this year by signing for the Williams team.

Since Williams formed their driver academy it has been a major boost for Formula 2 hopefuls.

Aitken, Williams’ reserve driver, had his opportunity to shine in Austria, where he tested his first Formula 1 car.

The Campos driver had this to say about his first Practice session for the team.

On hearing the news of Claire stepping down:

Trident’s, Roy Nissany, had his first glimpse of the Williams car at the Circuit de Catalunya.

He’ll get another crack at the whip this coming weekend at Monza.

No matter what the future holds Williams will be forever associated with Ayrton Senna.

The Brazilian joined the team for the 1994 season and participated in three races.

His untimely death at Imola will forever be imprinted on the heart of everyone who witnessed that day.

Since the FW17 chassis (1995) the Senna name has been stamped on the bodywork of the car.

Whether this remains as an ode to the Formula 1 hero’s memory on future cars remains to be seen.

For some, it will be as great a loss as the Williams name will be if it is to disappear.

This will be an interesting story. Who are they? And what can they do with Williams? We shall see in time. Meanwhile, all the best to the heroic Williams family and a massive thanks for all you brought to the sport @WilliamsRacing #f1 #WilliamsF1 https://t.co/CoJoGSi4NS

These are uncertain times. Let’s hope their driver academy programme remains in place so that the development of Formula 2’s outstanding talent can continue.

“I know that they can take this team back to where we all want to see it and that is at the front of the grid”. – Claire Williams 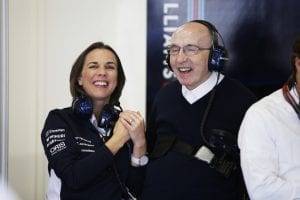