Are Tyre Woes Behind Hughes and VAR?

Are Tyre Woes Behind Hughes and VAR?

As the FIA Formula 2 paddock prepares to go back-to-back racing at Monaco, the Van Amersfoort team, and driver, Jake Hughes, have been hard at work trying to iron out the tyre issues, that hampered last weekend in Barcelona.

‘Difficult weekend after qualifying. Tyre wear was off the scale. Have to try to understand what happened and go again in Monaco.’

When asked if the team had managed to get to the bottom of their issues, the British driver said:

“Well, it’s been quite a short turn around, obviously, and so the team and I haven’t had a lot of time to dive super deep into the data. We have some ideas that we think were definitely a minimum contributing factor, but I don’t think we’ve got to the absolute bottom of it yet.”

The Dutch team, and Hughes, have been working hard in the short amount of time they’ve had available:

“I can confidentially tell you that if we went back to Barcelona this weekend, we wouldn’t face some sort of similar issue. But it’s clear that that’s our Achilles heal at the moment.”

As well as a handful of others, Hughes has been a stand-out driver this season, despite the reflecting results of misfortune. Jake, together with the VAR machine, could be a Championship contender, were it not for a few niggles:

“We have quite good qualifying pace in general. It’s my first weekend here in Monaco, and I’m pretty sure we won’t face what we had in Barcelona. But, we have to be on top of that aiming for the race. Hopefully it’s more about pushing flat out all weekend – we have a pretty good car so far this year for that.” 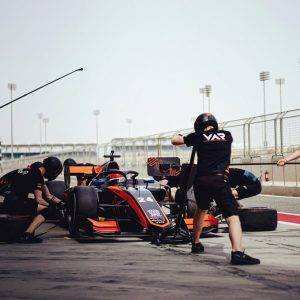