Marcus Armstrong had the perfect getaway once the five green lights went out in Zandvoort to take an unchallenged Sprint Race victory over the reverse polesitter, Clement Novalak, who had to settle for second.

With the track temperature rising higher than expected, strategies and starting positions became essential winning factors in the Sprint Race, not to mention luck, something that the Hitech driver hasn’t had much of in previous rounds.

This time, however, Armstrong showed a defensive display that earned him his third Sprint Race win of the season ahead of MP Motorsport’s Clement Novalak, who made his first Formula 2 podium visit.

In the race’s final two laps, a safety car was deployed due to an incident by Charouz Racing’s Tatiana Calderon that triggered a restart, but Armstrong managed to get a hold of the lead to claim his third win of the season.

It was almost a double podium for Hitech. Unfortunately, Armstrong’s teammate Juri Vips was taken out of contention by contact with Alexander Smolyar, which promoted PREMA Racing’s Dennis Hauger to the final podium spot in third, with Carlin’s Liam Lawson taking fourth.

The Dutch track only provided a few opportunities for drivers to overtake. However, following the late safety car, there was finally some action in the battle for fifth.

Vips won out for P5, despite sustained pressure from the home hero Richard Verschoor, who had to settle for seventh when Ayumu Iwasa made a solid move to take sixth place.

Further back, Logan Sargeant finished in the final-points-paying position for Carlin, ahead of Virtuosi’s Jack Doohan, who ended the race in ninth, with MP Motorsport’s Felipe Drugovich rounding out the top ten.

The 22-strong grid will be back for its final action around the Dutch track at 10:20 AM local time as Felipe Drugovich looks to put one hand on the title trophy from the pole position alongside Jack Doohan on the front row. 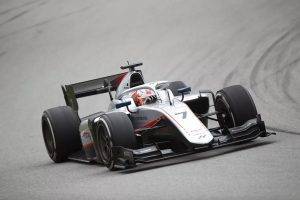