Armstrong quickest at the end of day 3

Armstrong quickest at the end of day 3

Marcus Armstrong continued to impress new employers DAMS by topping the timesheets of the final day of Formula 2 testing.

Armstrong set the fastest time of the day in the morning session with a time of 1.42.173.  The Ferrari junior just beat countrymen  Liam Lawson, Jüri Vips, and Guanyu Zhou by just under a tenth of a second.

Lirim Zendeli was fifth fastest under a tenth down on Armstrong, with Robert Shwartzman just three thousands’ of a second behind the German in sixth.

Ralph Boschung was seventh quickest for Campos, ahead of Richard Verschoor, Oscar Piastri, and Felipe Drugovich, who rounded off the top 10.

The morning session was also notable for how close the Formula 2 field was in terms of overall pace, with seventeen out of the twenty-two drivers separated by just under a second.

There was one interruption to the session, and that was for a red flag that claimed four minutes of track time before the session was resumed.

In the afternoon session, which would be the last of the three days,  Ralph Boschung was quickest with a 1.44.905 over six tenths quicker than Campos teammate Gianluca Petecof.

Roy Nissany was third fastest, ahead of Robert Shwartzman and Lirim Zendeli, whilst Oscar Piastri completed the top six.

Lawson was seventh ahead of Theo Pourchaire and Richard Verschoor with Guilherme Samaia finishing his testing programme on a high with tenth fastest.

Carlin’s duo of Dan Ticktum and Jehan Daruvala, had a quiet final day of testing, with Ticktum setting the best time out of the two with a 1.43.496, which was only good enough for twentieth fastest in the morning ahead of Daruvala, who was just under a tenth slower than the Brit.

Day 2’s pacesetter Christian Lundgaard also had a low-key end to testing with fourteenth in the morning and eighteenth in the afternoon, with the Dane’s best time coming in the morning with his time of 1.42.674 over half a second down on his ex-teammate Armstrong.

The Formula 2 family will stay in Bahrain for the next weeks before returning to Europe after racing has been completed. 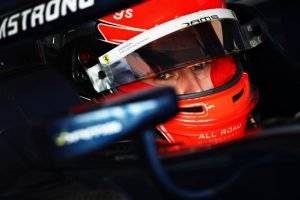