Marcus Armstrong gave it all to take his third win of the season around the sand dunes with an untouchable display. The Kiwi protege had a strong getaway from the front row, snatching the reverse polesitter Clement Novalak’s position but wasn’t entirely pleased with his start.

Storming off the line, Armstrong quickly claimed the race’s lead with the perfect getaway and, no less, a brilliant drive. The Sprint Race was all but decided on the opening lap due to Zandvoort‘s tricky layout that made overtaking difficult, which led him to win the Sprint Race comfortably.

The late Safety Car in the race’s closing stages didn’t bother him in the slightest, but speaking to Inside F2 after the race, the Hitech driver wasn’t entirely pleased with the start that earned him a victory.

He said, “The start was my target to nail, so to speak, really dirty on the right-hand side. I really wasn’t expecting to out-launch Clem, but I do know that the start is generally a strength of mine.

“It’s just about trying to execute the start as well as possible without exaggerating on a really slippery track surface, and to be honest with you, my start was actually pretty rubbish.

“In my honest opinion, I think everyone just had bad starts because of the poor grip, and luckily mine was just less bad.”

With five Formula 3 graduates on the grid having claimed a podium in the venue last year, it shows that experience is one of the key winning factors, as it takes time to learn the notorious banked corners of Zandvoort.

As with other drivers, his experiences taught him many critical winning factors with the stop-start nature of the circuit. Still, he insisted that many things had changed since the last time he drove around the 4.259 km in 2018.

He stated: “The track’s very different from 2018, but the general philosophy like pushing when necessary, not killing the tires with the amount of energy this track naturally has that was already embedded in my mind since 2018.

“Today is obviously much harder than in 2018 because in 2018 we didn’t have these Pirelli tires, so it was a bit more straightforward, but today it was just about management and not exaggerating.”

Starting from ninth with only a slight chance of overtaking, Armstrong isn’t the most optimistic driver for the Feature Race as the strategy and right pit stops are all to play for.

When asked if he could take the win from ninth, he added, “Probably not. I’m still starting in P9. We’ll try and maximize our strategy, whatever we choose.”

“I’ll try and learn from my mistakes of today. I’ll look through the data, and there’ll be a million mistakes. I’ll try and fix those, and we’ll try and rebalance the car a bit.

“We’ve got nothing to lose really from P9. Whereas the guys at the front who are fighting for the championship sort of need to play it safe.

“I mean, the ball is in our court. It’s a nice position to bend in because we can take risks, and others cannot. It’ll be fun.” 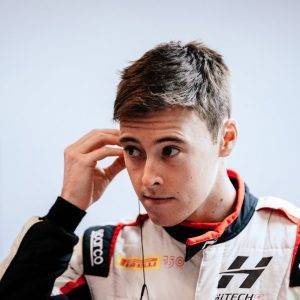