Armstrong Wins in Austria as Track Limits are Tested

Armstrong Wins in Austria as Track Limits are Tested

Marcus Armstrong took his second FIA Formula 2 win of the season ahead of Théo Pourchaire, who picked up a provisional podium that might be lost as ART driver sits under investigation for track limits violations.

While Armstrong looked comfortable throughout, Virtuosi’s Jack Doohan made championship-hopeful Pourchaire sweat in the closing stages as he closed in on the Frenchman.

Liam Lawson stalled on the formation lap, which meant he had to start the Sprint Race from the pit lane, while compatriot Armstrong led the pack into Turn 1 from his reverse grid pole, with Pourchaire following closely behind.

Behind the leaders, Doohan and the championship leader Felipe Drugovich got ahead of Richard Verschoor, who started third on the grid after being pleased with his qualifying performance on Friday. However, Verschoor was unhappy on his team radio after complaining his rivals pushed him wide at Turn 1.

The last race’s winner, Logan Sargeant, had a similar complaint about Ayumu Iwasa. The stewards subsequently investigated the Red Bull junior driver for pushing the American wide at Turn 3 on the opening lap, but no penalty followed.

Marino Sato became the first driver to retire from the race when he pulled into the pits with what seemed to be a mechanical issue on Lap 3.

Cem Bölükbasi lost 13th position after battling with Amaury Cordeel on Lap 8. After missing out, the Turkish rookie pulled into the pits a few laps after running wide and into the gravel before re-joining the race five laps down.

Lawson’s day worsened as a mechanical issue with his Carlin brought out the Virtual Safety Car. He stopped at the top of the hill at Turn 3 but could get the car going again, albeit slowly.

The respite for the Kiwi driver was shortlived, however – the problem he had stopped him from completing another lap as he pulled into the pit lane to retire from the race.

Many drivers, including Frederik Vesti, tomorrow’s pole-sitter, lost positions for not keeping within the white lines that mark the track boundaries. Campos also warned Olli Caldwell to keep it clean after a penalty for him meant he is only one penalty point away from a race ban. 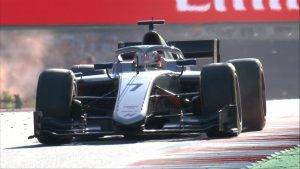