For the team that took home the 2019 drivers’ title with Nyck De Vries, 2020 proved to be a rather disappointing season for the French based outfit.

With a lineup of Christian Lundgaard and Marcus Armstrong, many were optimistic that they could mount a title campaign once more. Yet this season proved to be inconsistent, with them falling behind Carlin and newcomers Hitech in the teams’ championship.

Of the two ART drivers for 2020, Lundgaard seemed to be the less favoured rookie heading into the season after finishing sixth in Formula 3 in 2019.

Despite this, the Danish driver set out to prove any doubters wrong and thoroughly outshone his team mate, clocking up six podiums despite a mid-season slump.

He had a strong opening round in Austria after qualifying fourth and managing to take home fourth and fifth place finishes.

However, it was the following weekend at the Red Bull Ring where he really showed his talents. He revelled in the wet conditions to take sixth before storming his way to his maiden F2 victory.

Hungary saw him forced to retire after a collision with Luca Ghiotto in the Feature Race.

Silverstone proved to be a strong track for Danish driver, with him narrowly missing out on a podium in the Feature Race before utilising a late pit stop to charge his way to second in the Sprint Race.

He managed to hold on to second in the following Feature Race after suffering from heavy blistering on his tyres throughout. This was then followed by four consecutive non-points finishes.

Monza saw a return to form for the Renault Academy driver after taking back-to-back podiums with third and second place finishes.

Lundgaard was then able to take his first pole position in Mugello. However, heavy tyre degradation and a safety car saw his race lead evaporate before dropping to sixth.

Yet he was able to make amends with a dominant victory in the Sprint Race, snatching the lead off the line and finishing 14 seconds ahead of Louis Deletraz.

His strong run of form saw him jump to third in the drivers’ standings, but his championship hopes faded from thereon out.

An opening lap collision in Sochi with Juri Vips and Pedro Piquet saw him forced to retire and he sat fourth in the drivers’ standings heading into the penultimate round in Bahrain.

Despite his strong showings all season, his title campaign did not end with a bang but fizzled out as he finished the first weekend with one sixth place finish in the Sprint Race.

The season finale was not what the Dane would have hoped. His 21st and 12th place finishes saw him fall to seventh in the drivers’ standings and close out the season with six podium finishes.

Lundgaard’s plans for 2021 have not yet been announced, but his performances this year should see him return to F2 once more. If his talents this year are anything to go by, I would put him as one of the core title contenders for next year.

After being touted as a possible title contender for 2020, the 2019 Formula 3 Vice Champion will probably not look back on this season fondly after struggling with his car all year.

The New Zealand driver got off to a stellar start, with ART utilising an early pitstop masterfully which saw Armstrong finish second in the opening Feature Race in Austria.

However, the following Sprint Race saw him clock up the first of four retirements this season, with him losing power mid-race whilst in third.

A recovery drive was the name of the game in the second Austrian Feature Race, with Armstrong climbing from 12th to seventh in wet conditions. This was followed by his second podium of the season with third in the Sprint Race.

Yet Hungary proved to be the beginning of a disastrous run for the Ferrari Academy driver, with him failing to score in twelve consecutive races.

After trying to avoid his team mate who was suffering from a puncture, Armstrong collided with Artem Markelov in the HWA and was forced to retire.

Spain saw him forced to retire once again after beaching his car in the gravel, which was followed by another retirement in the Belgian Sprint Race.

Armstrong qualified strongly in Mugello in fourth and brought home another points finish in ninth, followed by ninth in the Sochi Feature Race.

The Bahrain double header summed up Armstrong’s unpredictable season. He qualified fourth for the first Feature Race and battled with the title contenders Ilott and Schumacher on his way to finishing seventh.

Yet an early collision with Tsunoda in the Sprint Race and a safety car restart saw him miss out on another podium to finish fourth, whilst his season was closed out with 11th and 14th place finishes in Sakhir.

Marcus Armstrong will be hoping he can turn a page on a disappointing season in 2020. With a possible move to DAMS for 2021, hopefully we will get to see more of his potential next year.

Overall, despite some successes in 2020, this year has proved to be an underwhelming season for ART, with the team having one driver massively outperforming the other once again. They will be hoping that 2021 will see them bounce back to form after taking George Russell and Nyck De Vries to the Formula 2 titles. 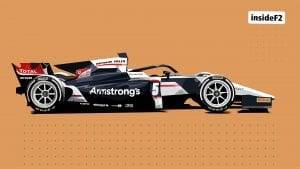