Ayrton Simmons looks ahead to the Formula 3 2022 season.

Ayrton Simmons looks ahead to the Formula 3 2022 season.

Ahead of this weekend’s Formula 3 round in Bahrain, we spoke to Ayrton Simmons who will be a part of our team this year! He will provide us with his insights and will be able to give us his opinions on the coming season. How exciting!

Q: How did the testing go and are you feeling well prepared for the upcoming season?

A: “Testing went really well- lots learnt. To be honest it’s probably the first time in that car where I’ve had a few sets of tyres for me to experiment with different techniques and learn a lot about the car. So yeah, it was a very handy three days and it went well. Obviously, we’re not where we want to be at the moment but there’s a lot of room for improvement so there’s a lot of potential which is very positive. It’s what we want and we just need to make sure that we turn our potential into a decent result and hopefully, some of the hard work we’ve been putting in for the last two or three weeks will pay off.”

Q: Can you feel a big difference between the F3 cars and GB3?

A: “Yeah, for sure, there’s a big difference between the cars. First of all, the horsepower is a lot more than in GB3. You can definitely feel a lot more horses pushing you forward under your right foot. Then, as well, in the qualifying lap the car generally has quite a bit more downforce so there’s a lot to learn on the driving side of things. So I’m trying to make sure that the adaptation goes as smoothly as possible which, so far, it has been, to be honest and it’s a step, a big step up but we’re chipping away slowly and getting a hang of the new car.”

Q: What circuit are you most looking forward to driving this year? Which will be new for you?

A: “There are two circuits actually, in terms of the weekend, I’m really looking forward to Silverstone, obviously my home race. I’ve got a lot of support there and it would be great to pick up a good result there in front of the home crowd and in front of my fans. In terms of new tracks, I’m really looking forward to Zandvoort. It’s an amazing layout, an amazing track with lots of banked corners, very tricky, twisty, non- stop, it’s just exactly what I want- and very hard work! Hopefully again if we can pick up a good result there then it will be definitely worth it.”

Q: Do you think you learnt a lot in Round 7 last year to build on this year?

A: “Yeah, there was a lot to learn in terms of how the car operates and how everything works, like the structure of the weekend, the different procedures and regulations that I’m used to. In the sense of the car, I just learnt the basics really. I was sort of thrown in at the deep end and I didn’t have a lot of time to experiment with different techniques or driving with the tyres or anything like that. So, I obviously got to learn how the car feels but in terms of technique and driving there was a good stepping stone, for sure, but there was still a lot of work to do when I arrived in Bahrain. I think, obviously, any time in the car would’ve helped and will always help but I was under a lot of pressure and got thrown right in the deep end there without driving the car before. So it was, sort of, bringing it home and learning by the end of the last race.”

Q: Have you set any defined expectations and goals for yourself this year?

A: “So in terms of goals and expectations, the main thing is to put on performances and entertainment and make people want to watch me race, that’s the main thing. In terms of results, I think, you know, it’s still very early days but I want to be in and around the top 15 for the first half of the season and then hopefully move closer to the top 10 by the end of the season. That would be great progress. Apart from that, there’s not a lot, there’s no pressure, just got to go out there and adapt as much as I can from what I’m used to and enjoy the ride.”

Formula 3 will start alongside Formula 2 this weekend. We can’t wait! We also wish all of our luck to Ayrton in Bahrain. 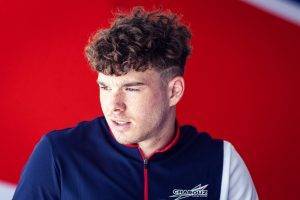