Ayrton Simmons looks to Imola after F3 debut in bahrain

Ayrton Simmons looks to Imola after F3 debut in bahrain

We spoke to FIA Formula 3 driver Ayrton Simmons following his debut about what the Bahrain International Circuit was like to drive and his expectations looking ahead to Imola.

We also asked the highly rated British driver about Silverstone and if his previous experience on Pirelli tyres has helped him adjust to F3.

Q: What was Bahrain like to drive and how does it compare to other tracks you’ve driven in the past?

A: “It’s actually a really cool track, from an outside point of view I thought it would be a pretty straightforward track with just a flat layout but when I actually got to do the track walk I was very surprised at the number of bumps.

“The track changes elevation quite a bit so that made it a lot more interesting so it actually turned out to be one of my favourite tracks I’ve raced on, the combination between high speed and slow speed, the middle sector has some really slow corners which you don’t see in every track and also the high speed corners in the last sector are quality as well.

“It’s certainly up there with one of the most interesting tracks or the most entertaining tracks that I’ve driven, not my favourite but it’s definitely up there.”

Q: Has your experience on Pirelli tyres in GB3 helped you adjust to FIA F3?

A: “No, my experience actually hasn’t helped at all because even though they are both Pirelli’s it’s a different compound; they are designed and built differently.

“To be honest it couldn’t be any more opposite than the FIA F3 tyre, in GB3 you build a tyre up to just the temperature you want and you go from there and you get two or three laps whereas with this Pirelli hard compound you get one lap let alone with the medium or the soft compound.

“Some of the laps you have to actually start the lap with no grip to be able to finish the lap with good enough traction so I think that’s hence the qualifying result there’s a lot of inexperience on my side with the tyres.

“As you see the more experienced guys can make the most out of it because it’s all about the tyre knowledge.”

Q: Do you have any specific goals for the next round in Imola?

A: “Nothing too crazy, for me I think it’s just seeing progress especially on the qualifying side of things and the one lap runs. I think we’ll be using a softer compound than what we were using in Bahrain, I think we’ll be on the mediums.

“I’ve never driven the medium tyre before, even in the test we’re going to be doing in Jerez and Barcelona we’ll be using the hard tyre again so it’s going to be a big task but I’m ready for it and I’m working very hard to try and minimise the inexperience because obviously that costs you lap time and results.”

Q: After winning at Silverstone last year how much are you looking forward to returning there in 2022?

A: Yeah very looking forward to it, regardless of the victory it’s an amazing circuit obviously this time round would be my home crowd there. Grabbing a win there last year was very positive, grabbing two wins actually at Silverstone. It is a good confidence boost that I’ve won there before so it’s a track that I know well so very much looking forward to it.” 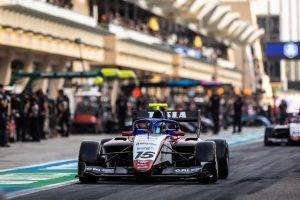