Baku is ‘Fertile Ground’ for Campos to Bounce Back

Baku is ‘Fertile Ground’ for Campos to Bounce Back

Campos Racing will look to revitalise their season at Baku, the sixth round of the FIA Formula 2 Championship, as Olli Caldwell continues his quest for his first points of the season and Ralph Boschung returns to the track after a neck injury forced him to withdraw from the last two race weekends.

The Baku City Circuit has been among Campos’s best tracks in the past few years. In 2019, Jack Aitken took the team to victory in the Feature Race and third place in the Sprint Race. Last season, Boschung scored two points finishes for the team in one of his strongest weekends of the season.

Team principal Adrián Campos Jr sees the weekend as a return to normal for a team that competed with only one car in Spain and Monaco.

“Baku has always been a fertile ground for Campos Racing. We want to bring back our strong form after experiencing some less positive weekends as a result of Ralph Boschung’s neck issues,” Campos said.

“Now his problems look to be certainly relieved, our target is to be back in podium contention and make it into the points on a regular basis. Olli will have another hard task ahead, but I feel confident he will be able to overcome it.”

Boschung carries fond memories of Baku, having taken his first points in F2 at the circuit in 2017 in his first stint with the Campos team. He started from the reverse-grid pole in the following day’s Sprint Race but slid down to eighth by the chequered flag.

After being cleared to return to racing on Monday, Boschung is primarily aiming to rediscover the strong form he found earlier this season:

“I’m looking forward to making my comeback and racing in Baku. It’s a very challenging circuit with a good number of very high-speed sections and feels cool to race there, close to the walls.

“I feel pretty optimistic that we will be able to bring some good results home. The main goal is to score some big points after missing the last two rounds.

“Besides, hot temperatures could affect tires and we could need to nurse them to the end. I can’t wait to see my Campos Racing friends on track once again.”

Caldwell, meanwhile, believes he can use the circuit’s long straights and heavy braking zones as an opportunity to continue developing his racecraft.

“I’m looking forward to heading to Baku,” the Briton said. “It’s once again another new circuit for me to learn.”

“Most notably, Baku is the layout with the highest speed in F2, so it will be interesting as well.

“It looks like a very technical circuit, with a lot of hard braking and medium-speed corners, so I’m looking forward to be heading there and, once again, learning a new circuit and add to my skill base in my F2 car.” 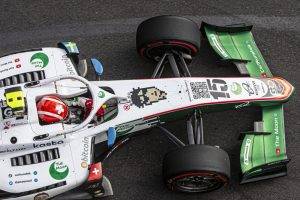