ART’s Frederik Vesti claimed a memorable first ever win in Formula 2 after getting the better of Prema’s Jehan Daruvala on a green flag restart to win around the streets of Baku in a race that got incident-filled towards the end.

In sweltering conditions at the Azerbaijani capital, it was Daruvala who stormed to the lead with a brilliant star on the opening lap at Turn 6 getting the jump on polesitter Jake Hughes and Vesti.

The race start had been mostly clean until Lap 3 where UNI-Virtuosi’s Jack Doohan had a flailing front wing after the Turn 1 outside kerb as a result of overshooting it. The Australian then pitted after getting a black and orange flag by Race Control to drop to 22nd and last.

On Lap 6 Vesti made an outside move on Hughes at Turn 3 on what would be the start of a serious decline in pace for the VAR driver. Vesti pulled away from Hughes, who noted on team radio about getting frustrated with being held up by the Brit.

A train of cars up to 12th began to form Hughes after Carlin’s Logan Sargeant overtook him and began to overtake him one-by-one and dropped out of the Top 10 to 15th by Lap 11.

Vesti then sets the Fastest Lap of the race on Lap 9, in a bid to close up on Daruvala but was still 3.3 seconds behind the Indian.

Vips and Pourchaire fought over 8th and the final point in the Sprint Race – with Vips showing his elbows by squeezing Pouchaire at Turn 1 on Lap 13. Hauger behind them was catching the battling pair.

Hauger then whacked the barriers on Lap 14 after locking up trying to Vips and Pourchaire at Turn 3, which brought out the first Safety Car of the race. This would set up a grandstand finish.

Prema nervously watched along, especially given that Daruvala’s advantage of 3 seconds was evaporated – unfortunately no thanks in part to Hauger’s accident.

Safety Car came in on Lap 16 and Daruvala timed the restart to perfection to fend off Vesti and the rest of the field as Verschoor overtook Sargeant to be on the rostrum.

Many cars went off on the restart including Vips and Fittipladi after Fittipaldi crashed and nearly taking Vips as collateral – which put paid to any good result the Estonian wanted. Vips pitted for Supersofts but was sent to the back to 19th  on Lap 18. That incident brought out the Safety Car again on Lap 17.

Further behind, birthday boy Olli Caldwell had a quiet race in the lower midfield before pitting in for a loose front wing – after hitting the back of Charouz’s Cem Bölükba?? – dropping a lap to finish 19th.

The green flag was waved on Lap 19 and Daruvala held onto it on the line but locked up into Turn 1 and allowed Vesti through while Daruvala fought hard to keep Verschoor and others behind at bay – lucky to avoid getting punted.

Verschoor then crashed out on Lap 19 after trying to overtake around the outside at Turn 6 trying to pass Lawson which brought out the Safety Car yet again on  Lap 20 to set up a shootout for the win.

Marshalls worked quickly on Verschoor’s car that brought the Safety Car back in and it became Vesti’s turn to lead in a final lap shootout. The Dane timed it to perfection and kept the lead in the final 6kms.

Big accident at Turn 1 which involved Calan Williams, Bölükba??, Boschung and Sato – with Boschung squeezing Williams that caused the first accident, then Sato and Bölükba?? arriving on the accident scene and became collateral to put three of the four of the race.

Up in front, there was nothing stopping Vesti as he wins for the first time in Formula 2 in a sensational drive with Daruvala a close 2nd and Lawson with a hard-fought race to 3rd.

In the Drivers’ Championship, MP’s Felipe Drugovich still leads the championship by a healthy margin of 34 points ahead of ART’s Théo Pourchaire and Daruvala in 3rd. 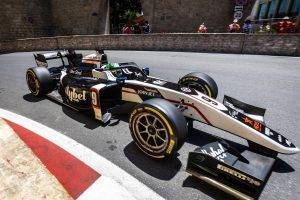