Barter: “Everyone saw I had the pace to be the winner of the championship” after losing French F4 title to Giusti

Barter: “Everyone saw I had the pace to be the winner of the championship” after losing French F4 title to Giusti

Hugh Barter says he is pleased with his French F4 performances this season despite missing out on the championship during the final round at Paul Ricard.

The Australian suffered an arduous weekend at Paul Ricard, retiring from Race 1 before salvaging a P4 and third place as Alessadro Giusti won the title.

Barter said: “I’m happy with how I performed over the year and I think there’s been really good progression and I look forward to carry this momentum into next years campaign.”

The 17-year-old couldn’t score points at Valencia and Spa as he had already driven those circuits this season in Spanish F4.

This hindered Barter’s title challenge but the Australian reckons his potential was clear throughout the campaign.

He said: “The French F4 championship was a good season, I think everyone saw that I had the the pace and potential to be the winner of the championship.

“The outcome is what it is you can’t really change anything about that now.”

Barter retired from Race 1 at Paul Ricard after a collision at Turn 1 which all but ended his title hopes.

The Australian said he became way to eager with his overtakes in a bid to climb the order and had contact again later in the race.

He said: “The incident in Race 1 was really disappointing, as soon as I got hit in Turn 1 I knew that the championship was going to be really hard to continue or even have a chance because I was two seconds back from the next care in front of me.

“By Lap 4 I was into P11 and I was just getting way too ambitious with some of the moves and had contact again with someone else.

“So for me it was all or nothing after that point I had to be fifth or something to keep the championship alive so it was a risky move and just part of racing.”

Barter was also embroiled in a tussle with Pierre-Alexandre Provost in Race 3 for third place.

The Australian used all his experience in wheel-to-wheel combat to defend from Provost to cling onto the final spot on the podium.

He said: “It was very tight, we were side by side for almost a whole lap and into the last corner I just defended and made sure he couldn’t get the criss cross on me or the switchback.

“And I was able to hold onto it and I think him as a driver has developed a lot so it’s good to see some of the drivers improving a challenging upfront towards the end of the season.”

Barter has one event left this season in Spanish F4 after the French F4 season has been completed, the final round at Barcelona on the 12-13 of November. 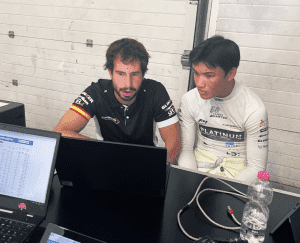