Barter focused on Spa despite not being able to score points

Barter focused on Spa despite not being able to score points

Hugh Barter says not scoring points this weekend at Spa in French F4 won’t be a big concern and he is still focused on doing the best job he can.

The Australian won’t be able to score points due to already having driven at Spa in the Spanish F4 championship earlier this season, he delivered an impressive trio of second places for Campos Racing.

Barter currently leads the championship and enjoys a commanding 67 point advantage a the top of the standings ahead of his nearest rival Souta Arao.

The 16-year-old said to InsideF2: “Since I won’t be scoring any points this weekend it’s going to be quite straight forward just winning as much as I can and making sure that I’m doing the best I can do.

“Obviously scoring no points it doesn’t really matter if I finish first or last it’s the same result for me but it’s a nice feeling I can still take the trophy home and so on so that’s nice.”

The Melbournian has competed in the Spanish F4 series multiple times in recent months but has a long break from French F4 since his double victory at Magny-Cours in May: “it’s been a while since I’ve driven the French F4 or more so raced I actually did a practice day with FFSA before the last round of the Spanish (championship) at Spa.”

Barter explained the major differences in the tyres between the two series and the contrasting driving styles needed to extract the maximum grip from the rubber.

“The Hankook there’s no combine with the tyre so you can’t turn and brake at the same time as much as you can with the Pirelli and it’s probably easier for me to go back to the Pirelli than it is to come back to the Hankook.

“But it is what it is and at the moment I seem to learn how to adapt back to the Hankook a bit better but this weekend’s Pirelli obviously so I think it should be not too much of an issue and I look forward to it.”

He also discussed the impact dirty air at Spa-Francorchamps has on racing and the lessons he learnt from the Spanish F4 weekend at Spa.

“There are definitely things I can take away from the Spanish F4 obviously dirty air was a huge factor so I know how to follow a bit better in the second sector.

“There are still some things that obviously I need to work on and try and improve after the Spanish but a lot of the braking markers, a lot of the turn in points, just a lot of the references are the same so I should be ok for that so hopefully I can take some experience and use it, especially in Race 2 since it’s reverse grid.” 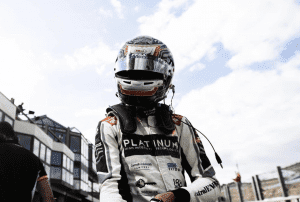