Hugh Barter suffered a disappointing weekend at Valencia, however, salvaged a seventh place finish in Race 2, to gain two points towards his Spanish F4 championship challenge.

Despite a disappointing trio of races which also saw a double non-score, the Australian did manage pole position for Race 3 after a storming lap in Qualifying 2.

In the third race of the weekend, Barter got an agonisingly poor start and dropped to the back of the field ending his hopes of a podium finish.

After the arduous weekend at the Spanish circuit, Barter is looking ahead to the next round at the infamous Spa-Francorchamps circuit in Belgium.

The 16-year-old said via his Instagram: “Not the weekend I wanted. I made some mistakes that cost us good points, apologies to Campos Racing. We move onwards and hopefully, the next round is better.”

After three rounds of the championship, he currently sits third in the standings on 69 points behind the ultra-quick Nikola Tsolov who dominated at Valencia taking all three wins, and Tymoteusz Kucharczyk.

Fortunately for Barter one of his title rivals, Kucharczyk didn’t take full advantage of his misfortune as the Polish driver slumped to a non-score in Race 2 for MP Motorsport.

The Australian fought hard with his Polish rival in the first round of the Spanish F4 championship at the Algarve International Circuit in Portugal.

The duo battled for the race lead with Barter coming out on top taking a well-deserved victory in the Algarve earlier this season.

The Melbournian will continue his assault on the Spanish F4 championship at the next round at Spa-Francorchamps on 8-9 July.

He explained in pre-season to InsideF2 that he is eagerly anticipating the Belgian track and the undulation is much more pronounced than on tv.

“Definitely the hill of Eau Rouge, you don’t see it on tv until you’re really standing at the corner.

“So I really look forward to that especially racing so hopefully everything goes well and we’re fast.” 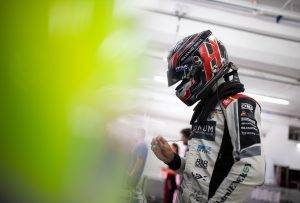