Brad Benavides became one of the eight new faces joining the post-season testing this week. The Spanish-American driver got his first taste of Formula 2 machinery with Charouz Racing on his first visit to Abu Dhabi.

Heading to the three days of testing as the least experienced driver, given the stop-start nature of his single-seater career, he’s only expecting to learn a bit more about the car.

“It’s been a bit tough because I haven’t done any previous tests or similar cars to Formula 2, and there’s a lot of testing going on with the GP2s that drivers frequently do before hopping in the first time in Formula 2, and I haven’t really done that.” He stated,

“One time, it was raining, so they were really giving me the feeling of the speed of the Formula 2 cars. It’s been a bit tough because it’s also a track I didn’t know.”

The Florida-born driver wasn’t expecting to be fighting over the top ten positions with the lack of experience around the sun-blasted circuit that he was looking to change through the 18 total hours of testing.

Though he struggled to catch up with other driver’s lap times on both sessions on Day 1, Benavides quickly improved his performance to finish eighth with less than five-hundredths of a second behind the more experienced driver, Roy Nissany.

He added, “I’ve been learning the track, learning how the car handles, and I’ve been trying to step by step to maximize the package.

“At the moment, it’s a bit long way ahead, and I can see it, but there’s so much data in every session and some places.

It’s getting better, but some places were worse, and then in other sessions, vice versa, and it’s just about gathering so much knowledge.”

With only seven drivers confirmed for next season, Benavides is still hopeful to step up his game to a higher championship, even if he needs to be more confident in his potential regardless of his career that only started in 2018.

He continued, “I’m not 100% certain because, for me, it’s absolutely my dream. There’s nothing realistic sometimes in life. Obviously, it’s not the most ideal because I’m a driver that really hasn’t done so many single-seater seasons.

“I’ve had a little bit on and off, and in general, I’m not like a driver that’s been doing this, and it’s been in the game since inception. I enter late into my motorsport career per se.” 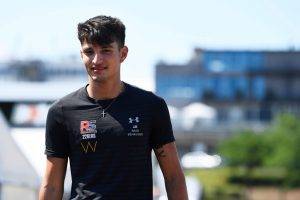