Bittersweet Qualifying for PREMA in Bahrain

Bittersweet Qualifying for PREMA in Bahrain

It was bittersweet for PREMA’s first Formula 2 qualifying session of 2021 in Bahrain.

PREMA was looking forward to starting the season and getting their first podium and wins in Bahrain, but their qualifying session did not go to plan.

Robert Shwartzman was forced to a stop on track. Meanwhile, Oscar Piastri had a positive start with a P8 to start today’s ’s Sprint Race 1 from the second row.

Shwartzman had gotten himself into the top five with his first run. However, the PREMA car went into safety mode at the end of his out lap, forcing him to stop on track.

The Russian was left to settle for 12th, but will have plenty of chances to rebound with two reverse grid races tomorrow.

Shwartzman said: “Qualifying didn’t go as we wanted to. The first run wasn’t bad, to be honest. I made a few small mistakes that compromised the lap time than others, but I knew we could have set the same lap times of the guys in front.

“With my second set, I was very confident that we could do a really good job. Unfortunately, after my warmup lap, the car stopped because of a system that places it into driver safety mode if you hit too hard the brakes while on the throttle.

“While warming up, I overreached the limit of braking, and my car switched off. I was not able to restart anymore, and we basically lost our second run in qualy and a top-5 starting position.

“I’m very disappointed, but judging from testing, I think we have a great race pace. I’m going to do my absolute best in race 1 and see where we end up.

“It’s going to be tough, but I will try to pass as many cars as I can and finish in the highest possible position.”

Piastri had a smooth run and improved his lap times consistently throughout his first qualifying session in F2.

The rookie took ninth after making good use of his tyres in the traffic, but moved up to eighth toward the end of the session.

Piastri said: “P8 in the first qualifying of the year is definitely not bad, and it’s also nice to start from P3 in the reverse grid for race 1.

“I had a messy first run which wasn’t ideal preparation for the second. Then the red flag threw another spanner in the works for the prep for set 2, but in all, it’s not a bad start.

PREMA will want tomorrow’s Sprint Races to be a continuation of the form that the Italian outfit showed last year. 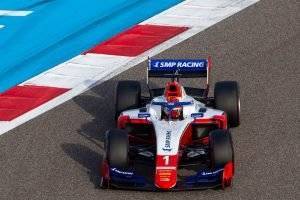