Cem Bölükbasi drove his maiden FIA Formula 2 race in Bahrain this weekend, and overall it was a good day at the office. After months of testing and utilising opportunities to get behind the wheel of other racing cars, the Sprint Race was Bölükbasi’s first ever chance to race in a current Formula 2 car.

Qualifying 20th for Saturday’s Sprint Race, he had a mountain to climb, to get anywhere near a points scoring position. The pressure was on to get a good start, and stay out of trouble.

“It felt unreal. I really enjoyed that. It was pure joy for me to drive it and from a competition point-of-view it was really fun also. It was clean racing. The driver standards were really high. I had somer really good battles, and I think the race pace was really good. Overall a big positive, I gained six positions I think. It was perfect.

“It was kind of like in the movies, when the lights started going out I felt the time kind of slow down a bit, like suspected animation.

“When you’re in the helmet you forget about everything else.

“I didn’t count that many cars I passed, but my engineer said we were P15 at the Safety Car. I know I overtook some people on the first lap, I think I got rid of the chaos basically, and gained a few positions so it was nice.”

Passing and being passed by his Charouz team mate, Enzo Fittipaldi  throughout the race, the two avoided trouble, and are already working well together as a team.

“Enzo had a brilliant start up until Turn 4 and he was quite a bit far ahead, and then I saw him running wide on 6 and I thought he had some issues going on. He did a good job too. I think the car was great for both of us.”

Sunday’s Feature Race looks to be as good as the Sprint, with the barmy Bahrain weather having an influence on all sessions this weekend.

“The Feature Race should be more difficult with the temperatures rising but it’ll make it more fun, and I’ll be on it!” 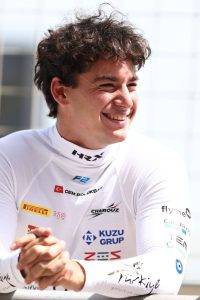