The Turkish racer has had a difficult start to his maiden season after two accidents on track, the first at the Formula Regional Asia Championship pre-season, and the second, at the Jeddah Corniche Circuit, in March.

The accident during the Practice session, saw Bölükbasi withdraw from the race weekend in Qatar. Because of injuries sustained, he was also absent from the following race weekend at Imola.

However, since his return, the Turkish driver has hit the ground running. Despite a P20 and P18 finish, Cem’s pace in the Charouz car, was clear to see in Barcelona.

Last time out, in Monaco, he was close to his first points in F2, with a P11 finish in the Feature Race. A hugely impressive result to achieve around the tricky streets of Monte Carlo, more-so when starting at the back of the field.

When asked about his season so far, Bölükbasi replied:

“Everything has been enjoyable, the whole process. I’m enjoying  the car, it’s really fun to drive, like the small details of having to do the perfect pit-stop It’s all actually a lot more detailed than it seems.”

Speaking about the trials Formula 2 presents, he stated:

“The challenges are the strategies, such as, how the Safety Car affects strategies. You have A, B, C strategy where there’s a Safety Car. So I think adjusting to all of those details are a challenge.

“Formula two’s in a different category compared  to others I’ve raced, it’s a higher level.”

Accepting that crashing is a part of racing, the former eSports racer summed up his feelings for his experience in Formula 2 so far: 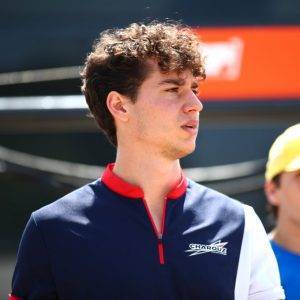