Bölükbasi wishes for rain to overtake in difficult Hungary

Bölükbasi wishes for rain to overtake in difficult Hungary

As many drivers on the F2 drivers look to turn their fortune around near the summer break, one of those drivers is Cem Bölükbasi.

After enduring a difficult start to the Formula 2 season, the Turkish driver has been struggling to convert his pace into points. His best finish until so far has been in Monaco’s Feature Race where he finished eleventh.

Speaking to us after the qualifying, Cem gave his thoughts on the improvement in pace. “I think I mean since Austria we had the good qualifying pace,” he began saying. “It’s just that in Paul Richard we just had some traffic and the red flag was unfortunate for us. So I couldn’t really set a representative lap time.

With rain forecasted for the Sprint Race, the prospect has rather excited him. As in Hungary, it is difficult to overtake, a shower of rain could spice things up and make gaining positions easier

Showing his delight said, “Yeah definitely I would like some rain, [because] it’s still P16, Sprint Race can’t do much in Hungary to overtake. So to overtake eight cars to get into points, I would rather have some rain to change things up a bit and I like driving in the wets.”

Recalling the time the Charouz Racing System driver took his first Formula win in Hungary, he mentioned that he loves this track quite a lot.

Bölükbasi’s step up to F2 hasn’t been easy but nevertheless, he was upbeat about it. “I think it’s going pretty well,” Cem began saying. “The major setback for us was obviously the crash which [locked] me out of the car for two months, so for me, the season really started in Barcelona and because it kind of reset all our progress.

“So I think from Barcelona onwards we have been progressing really well. I think it has been going pretty nicely since Barcelona and we still have five weekends or four after this one; so there is still a lot more to go.”

Can the Turkish driver improve his pace and have a better race on a track he knows well? Only as the race pans out, we will know. 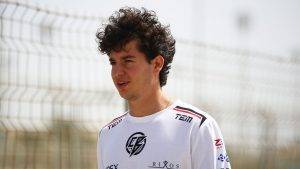