Boschung rues a weekend of two halves in Jeddah

Boschung rues a weekend of two halves in Jeddah

After starting his racing weekend with a brilliant fifth place in Friday’s eventful qualifying session in Jeddah, Ralph Boschung’s weekend in FIA Formula 2 slowly went downhill as it progressed.

The Campos driver started Saturday’s Sprint Race from seventh, after being promoted to fourth in qualifying once the stewards assigned post-session penalties.

He eventually crossed the line in eighth place but lost the point he would’ve gained due after the stewards penalised him after the race for not lining up correctly in his grid slot.

Despite choosing for a different set-up for Sunday’s Feature Race after complaining of lack of straight-line speed the day before, Boschung could not fight for points and finished the race in 15th position.

Not quite the end of the weekend the Campos Racing driver wished for, after excelling in his qualifying session run in Jeddah for the second round of the FIA Formula 2 Championship.

Boschung reported he was “Happy to return to Jeddah after such a positive result on the same track last year, and to be challenging at the front during qualifying.”

Having to abort his quickest lap run due to a red flag and encountering traffic at the final corner when having another shot at pole position, he eventually had to settle for fourth place, which turned into a seventh-place-start for the Sprint Race.

On Saturday, the 24-year-old  managed to stick his elbows out and fight for every place, finally claiming a hard-fought eighth position.

However, like many other drivers during the eventful weekend in Jeddah, Boschung was handed a post-race penalty and was stripped of the only point-scoring finish scored throughout the weekend and was demoted to 15th.

The Feature Race did not bring any more luck to the experienced Swiss star, who opted for a different set-up from Saturday after noticing a lack of speed in the straights but still only crossed the line only in 15th position.

Campos Racing would leave Jeddah empty-handed after Boschung’s teammate, Olli Caldwell, did not score any points.

The F2 teams are headed to Barcelona for three days of testing, before moving to Imola for the next race weekend, held between the 22nd-24th of April. 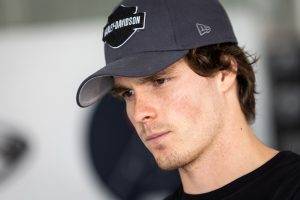