Five points scoring finishes have put Ralph Boschung firmly in the hunt for a top 10 FIA Formula 2 finish this year.

With 36 points on the board, he currently sits 10th in the standings, only five points behind UNI-Virtuosi’s Felipe Drugovich.

This is stellar achievement for the 23-year-old in his fourth F2 campaign. His last campaign came in 2019 with Trident and saw him take home three points on his way to a 19th-place finish in the standings.

Boschung has already more than doubled his previous best haul of points and has credited the relationship with Campos Racing for his success so far.

“I think for sure in Bahrain it was not a great start to the season but after, I would say since the test in Barcelona, we found a really good rhythm and kept taking that rhythm in Monaco and then in Baku again.

“I’m very happy so far but it’s very difficult, it’s a very high level so it’s going to be very tricky to keep this form but if I can, I for sure will.”

This season seen him finish in the points in all three Monaco races and twice in Baku, after failing to score during the opening round in Bahrain.

Boschung has previously not completed a full Formula 2 season. The Swiss driver’s best performance was for MP Motorsport in 2018, with 17 points and 18th in the drivers’ championship.

Nevertheless, this time around he can be more relaxed knowing that he has the security of a full-time place on the grid.

“I know that I am driving a full season this year. I got the financial backing, so I think that helps a lot. I just feel like it is a good match at the moment.

“For sure, the past seasons have been very difficult, and three points is not much but even back then I think I had some flashes of speed but just probably just couldn’t capitalise on the results.”

Heading into Round 4, Boschung was aware he going to have a tough midfield fight on his hands but was ready for the different challenge Silverstone would pose in front of packed crowds.

“Very excited to be back. Silverstone is an awesome track to race and it’s going to be very exciting to have fans as well.

“Obviously, we have a lot of rookies this year, so they perhaps didn’t know the track [in Monaco and Baku] and maybe they didn’t have the references in the races compared to the experienced drivers.

“I expect maybe to have more action on normal tracks like Silverstone where most of the drivers drove on this track, so would make sense if there is more risk taking in some corners and should be exciting.”

Only time will tell how Boschung will fair. Yet his performances so far this season mean he is certainly one to keep an eye on as he hunts down a maiden F2 podium and another strong haul of points this weekend.

Will Boschung have success at Silverstone? 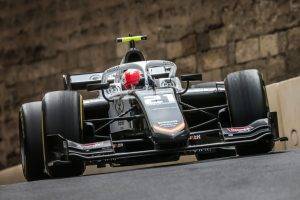