Repairs to concrete barriers at the Jeddah Corniche Circuit saw a delayed start to proceedings.

“I had an amazing start from seventh, immediately to third.

“I managed to outbreak Zhou around the outside in Turn 1. I was basically third. I couldn’t believe it.”

He came close to overtaking Shwartzman in the opening laps:

“On Robert I planned the attack because I was pretty close to him. But when I couldn’t pass him it was also about trying to save the tyres a little bit because we still had some race distance to go.”

Zhou looked fast, and was catching Boshung, making a move but to no avail, missing the apex and overshooting the track:

“Defending Zhou was not easy, because suddenly he came very quickly.”

Despite the Formula 2 cars having the same spec, tyre choice and team strategy can make all the difference, especially in a Feature Race. Boshung knew a different approach was needed to stay ahead of the latest F2 driver to graduate into Formula 1 next season:

“We had the pit stop, and if there wouldn’t be any pit stop, probably it would be quite difficult, because he seemed to be very strong on the options, on the same tyre.

“I think if everything would have gone smoothly I’m pretty convinced that I could have stayed in front.”

The Swiss man has had a mixed season, with three retirements, and six point’s paying positions in Baku, Monte Carlo and Sochi. The Campos car has seen some improvements throughout the season.

“The team did really good because we struggled a bit with the starts in the beginning of the year. We’ve improved race by race and I think we found a really good trick.” 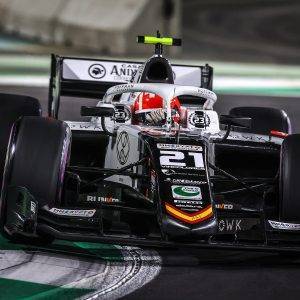