With the season heading into the final rounds of the championship performance and points will be critical. The drivers focus now on the second leg of the Italian tour at the Mugello circuit in rural Tuscany for round nine.

Carlin will look favourably at the season thus far especially the pace and performance of their Japanese driver Yuki Tsunoda.

Tsunoda remains in the title challenge as we head into the last phase of the season. His performances have caught the eye and attentions in both the media and the Formula 1 paddock.

Sitting  currently 4th in the FIA Formula 2 Championship with 123 points he looks set to take his challenge down to the wire.

Tsunoda started last week in positive form with solid performances in both Qualifying and the Feature Race. However, a DNF on Sunday’s Sprint Race has forced the 20 year-old to focus on a new weekend and put last week behind him;

“I just needed to reset and relax, leave last weekend behind,” explains the Honda Formula Dream Project driver. “Just think about the positive things, we did do well on a lot of points and that is important. But now I will concentrate on Mugello, I have never been there but I have worked on the sim, the simulator is not enough to really know what the car will be like but a good place to start.”

“I think that it seems like a very interesting track, very high speed, like Spa which I like so I am looking forward to really enjoy it. I will need to focus more than usual in Free Practice on the circuit and adapting to the track as soon as possible to be ready for Qualifying.”

His teammate Jehan Daruvala has not had quite the impact on the season as he would have hoped following good form last year in Formula 3.

The Indian driver is currently 15th in the standings with only 23 points after sixteen races.

Daruvala though had a solid round in Monza with a top ten finish in all sessions last time out. This would have been promising given the difficulties he has had though the season. Discussing the last round he remains positive he has the equipment to take his performances in the right direction,

“It was very important to find the straight line performance that I believe we did in Race 2 in Monza after the engine change,” asserts the 21-year-old Indian Carlin driver. “That gives me more confidence for Mugello and I am very much looking forward to this weekend.”

“It’s a new track for everyone, a new challenge and I am confident of doing well. We’ve spent time on the sim at Red Bull and Carlin, I have been there 3 or 4 years ago in an old Formula 3 car but things have changed since then and I do not remember so much so it will be a good challenge for everyone.” 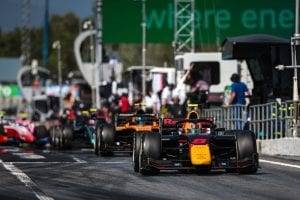