Alex Dunne became British F4 champion despite not attending the final round at Brands Hatch due to his commitments in British F4 clashing with Italian F4.

Loake kept the lead from his first British F4 pole position and controlled the first race of them weekend keeping Gray at arms length.

“We started from pole just had to get our normal start the we always do and just lead from there.

The 17-year-old also explained his start wasn’t perfect due to the pit straight’s undulating nature.

“The start was actually not my best ever it was quite tricky but with the nature of Brands Hatch it’s just so tricky to get off the line with how ‘un flat’ it is where you start.”

Despite failing to challenge Loake for the victory, Gray was pleased with second place and his efforts in Race 1 to take second place.

(Loake) was really quick and he was good on the first lap which really helped him as well. I had a good start but it wasn’t really enough to get past him at all.

“Mainly in the middle sector he was just really really fast, for about 60% of the race I was just managing the rear tyres and trying to keep them alive for tomorrow and that was it really but happy with P2 nonetheless.”

Carlin driver Louis Sharp retired from the first race of the weekend with an engine failure.

The New Zealander lost valuable points as he attempts to hold onto fourth in the championship as Loake closed the gap down to a mere three points.

Despite the agonising start to the final weekend of the season, the 15-year-old is pleased with his first British F4 campaign.

Sharp said: “I think so, obviously we were late in the championship so I missed the first round and I didn’t do a lot of pre season testing so I think it’s been a good year.

“I’m trying to hold onto P4 in the championship, that race has made it a bit harder but I think if we can finish the year even in P5 I think overall I’ll be really happy with how the seasons gone.” 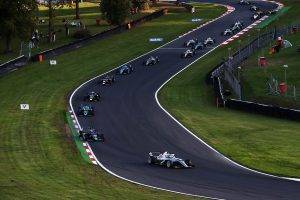