Tatiana Calderón is looking forward to driving at the Monza Circuit this weekend in the FIA Formula 2 Championship, after scoring points for three consecutive seasons in the GP3 series, between 2016-2018.

The Columbian driver has made a recent return to Formula racing, after almost three seasons competing elsewhere.

“In my case it was a bit hectic at the beginning with Spa. I only had the confirmation on Tuesday [23rd August] that I was actually going to drive there; very little preparation.”

Calderón brought the car home in both the Sprint and Feature Races, doing an incredible job. She went immediately into training for the next two races that are a part of a triple-header:

“And from there I went to do a little bit of simulator back in my house for Zandvoort. Yet again there was nothing else I could do for Zandvoort.

“This week, a little bit of training on Monday/Tuesday. And I went to ADL in Graz – I have been in a partnership with them for a couple of years so I know the simulator quite well and the people working there, and they have really helped me to prepare for here, for Monza.

“I just managed to come last night to Monza, and hopefully all the work that we did on the simulator will pay off this weekend.”

During the F2 Round Table media session, I asked Tatiana about her previous good results at the Italian circuit. She finished in P10, seventh and P6 in 2016, ’17 and ’18 respectively.

“When we have done well at a track, it means initially it suits your style a little bit better. There’s not that many corners here, and it’s more slow speeds. I think I’ve been stronger in the past in this regard, and in the brakes.”

Considering her approach for this coming weekend after so little preparation, Calderón said:

“I think probably Qualifying is going to be a bit of a nightmare to see who goes out first [laughing] and lose on the slipstream.

“On this track in particular there’s always entertaining races, and you have to be patient and follow a little bit. When you feel with the tyres the track is a little bit different and it’s been resurfaced in a few places compared to the last couple of years, and now a bit more gravel, which I kind of like when you have more gravel and not escape roads.

“The focus on those brakes will be important for here.” 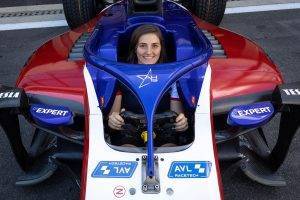