Campos Racing driver, Olli Caldwell, has not been having as ideal a debut FIA Formula 2 season as he would have hoped, with only one points-scoring finish to his name, but is hopeful of his chances at Budapest, he told InsideF2.

Compared to his Swiss teammate, Ralph Boschung, the British driver has been outshone in terms of form. However, in Austria, Caldwell’s hard work seemed to have paid off as he finished a series-best sixth in the Feature Race in the changing track conditions.

And while he couldn’t improve on that in Le Castellet, the Alpine Academy driver sounded confident for the weekend in Hungary. When speaking to InsideF2, Caldwell talked about his expectations from Hungary and his working relationship with current teammate Robert Merhi:

“From [Austrian] Qualifying it was a good result, then, unfortunately, did not stay due to track limits. We were top nine in qualifying, so from that we knew we had the pace for a good weekend.”

Caldwell mentioned the difficulty of passing cars during the Sprint Race but did not shy away from mentioning the gamble that paid off during the Feature Race:

“For the Feature Race, it was pretty chaotic, with some cars starting on wets, some on slicks. Obviously, myself and the team made the right call going on slick tyres.

“It was very 50-50 but yeah, starting on slicks. It was a crazy first few laps like passing the cars on the wets pretty quickly.

“But a very good result in the end, good pace when everyone was on slicks and we made the switch to prime tyres.

“So it was a very good result to get the first points; great for Roberto to fill in for Ralph so he got on the podium in the end as well. A very good weekend overall.”

This weekend in Hungaroring is expected to be challenging for teams as rain showers are predicted for Saturday and Sunday. However, when asked if Olli enjoys racing in the wet, he had a very balanced view.

“I do at some tracks, some more than others. Obviously it was wet here in F3 last year, which I think was good racing.

“This track tends to struggle in the dry with racing. I prefer it to rain on Saturday, honestly. Yeah, I am looking forward to it, where qualifying is.

“Maybe if I qualify at the front, I prefer dry to stay there. It’s easier to defend but sort of wherever happens happens, I look forward to racing.”

Neck pain has forced Olli’s teammate, Ralph Boschung, to sit out of racing. Substituting for Ralph, Roberto Merhi has made quite a return to F2.

When he gave his thoughts on his new teammate, the Alpine Academy driver praised the Spaniard and revealed the two weren’t strangers: “I actually met Roberto for the first time a few years ago in Macau.

“I met him there, I have known him for a few years now and then for him to come in, he has done a great job. Obviously, he has driven a lot of race cars, for a long time more than my entire car career, I think.

“Obviously, he was in Formula 1, he has a lot of experience. He’s come in, he’s still learning the car a little bit in qualifying but his race pace was instantly strong.

One particular statement from Olli that stood out from the interview was that Mehri was struggling in qualifying. When asked how the team was dealing with it, he revealed: “So from the team, they have previous data from previous years. Even going back to Jack Aitken and stuff like that.”

He added that all previous years’ data has allowed the team to make an ideal lap. This then allows for comparison between previous data and between Caldwell and Mehri.

Olli summed up his expectations for the weekend: “I have had a few good qualifying results here in the past. I wouldn’t say it’s my strongest track but as a team in the last few weekends, we have learnt a lot.”

He noted that the team’s qualifying pace meant they should be finishing higher and proof of that is in Austria. Trialing a new set-up, Caldwell was hopeful that he and the team can score good points in Budapest. 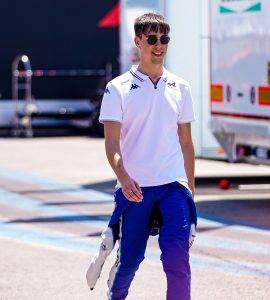