Campos Racing and Motorsport Mourn the Passing of Adrián Campos

Campos Racing and Motorsport Mourn the Passing of Adrián Campos

Adrián Campos owner of Campos Racing and one of the great talent spotters of junior talent which included the likes of Fernando Alonso has died at the age of 60.

His passing was confirmed on Wednesday night.

“Today is the saddest day in the history of Campos Racing, our President and founder, Adrian Campos Suner, has left us. His heart stopped beating, but his memory will be the engine that will keep us all fighting to continue his legacy … Rest in peace.”

Adrian, RIP. You were so kind, true to your word, competitive, mischievous, wise. You always knew exactly what to say to me, because at heart you were still a driver. And you created a family at Campos full of brilliant, talented people, who will miss you dearly. I will too. ? https://t.co/j6kfQuNKeR pic.twitter.com/q7Z9TJDyNP

Well respected, Campos’s motorsport career began in Formula 3 in the early 80s with a spell in Formula 3000 prior to a move towards Formula 1 as a test driver for Tyrrell in 1986.

Minardi signed Campos for the 1987 Formula 1 season alongside Alessandro Nannini, becoming the first Spaniard to race in a Formula 1 Grand Prix after 10 years.

He then switched to touring cars after a spell on the sidelines due to an unhappy second season at Minardi before forming Campos Motorsport in late 1997.

The team instantly saw success with Marc Gené winning the 1998 Euro Open by Nissan Championship as well as the Teams’ Championship. Gené moved onto Formula 1 with Minardi in 1999.

Gené’s place would be taken by 18 year old Fernando Alonso, who won the Drivers’ Championship on his first attempt before moving to Formula F3000 the following season and then Formula 1 with Minardi, where he would later become a two-time World Champion with Renault.

Campos moved into the 2005 GP2 Championship with Juan Cruz Álvarez and Sergio Hernández becoming the team’s first driver line up in the series.

Campos won their first race two years later courtesy of Giorgio Pantano, who took the top step in the Feature Race at Magny-Cours. The Italian secured another Feature Race win on home soil at Monza on his way to finishing third in the driver’s standings that season. Pantano’s teammate Vitaly Petrov won the final Feature Race of the season at Valencia.

The team then received backing from businessman and Formula E founder Alejandro Agag as the Campos team won their only Teams’ Championship to date, with Petrov and Brazilian Lucas di Grassi taking four wins each to round off a superb season.

Agag would take over the running of the GP2 team from 2009 to 2013, with Campos bidding, and later winning, a place on the expanding 2010 Formula 1 grid. However, various challenges prevented Campos fulfilling his Formula 1 dream and the project was later bought out by José Ramón Carabante who renamed the team Hispania Racing.

Campos would return to GP2 in 2014, with Arthur Pic taking his maiden win in GP2 at the Hungaroring, and Rio Haryanto taking three wins for the team in 2015.

Mitch Evans took the team’s final GP2 win in 2016 in Austria as they moved into the rebranded FIA Formula 2 Championship with Campos giving debuts to Formula 1 star Lando Norris and IndyCar sensation Alex Palou at the tail end of the 2017 season.

Everyone at InsideF2 sends our condolences to the Campos family and team. 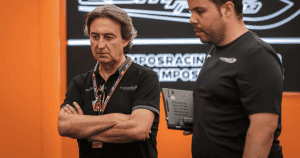