Campos Raring to go for Austria

Campos Raring to go for Austria

Campos Racing is raring to go for the opening round of the rescheduled Formula 2 season as the Spanish team look for a strong start to the season.

The Spanish based team which announced yesterday that it would be agreeing a sponsorship deal with the Spanish tourism board to promote the country in welcoming tourists to return to Spain are hoping to get the season off to a good start.

Team boss Adrian Campos hopes that fans can still enjoy the racing even if they are not allowed to attend, with the ex Minardi driver believing that motorsport will be slightly different after a layoff.

“Motorsport is going to be slightly different but we feel confident that everything will go according to our plan. We expect our fans will support us as always and let’s enjoy the passion for racing together.”

Campos’s number one driver Jack Aitken who signed for Williams as a junior driver over the winter is relieved to get back to real racing after spending time over quarantine erasing with fellow F2 drivers Guanyu Zhou and Louis Deletraz.

“I am very happy to be back racing properly. As much fun as eSports was, it can’t replace the feeling of racing on a real racetrack and especially not with Campos Racing and all the guys, who I know so well now.

“I am looking forward to seeing anyone again and getting back on business. We are making the best preparations we can for a very busy season ahead of us.”

“I am super anxious to be back. I can’t wait. Fortunately life is getting back to normal and we can go racing again. I am super excited ahead of the season opener. I worked a lot preparing everything for these first races. Let’s see what we can do on the track. It is going to be very interesting to race with four different tire compounds so I am curious to see what happens.”

Samaia’s hopes that he can do his best in Austria, where he hopes to have fun and learn as much he can in his rookie campaign.

“It is going to be challenging the adaptation of teams and drivers after so many weeks away from tracks with new 18-inch tires and compounds. I hope I can deliver the best I have got. I hope we can put a good performance together. But the goal is to have fun and at the same time I am focused on learning as much as possible as I am a rookie driver.”

Practice for Formula 2 will begin at 11:55 with qualifying for the feature race commencing at four o’clock. 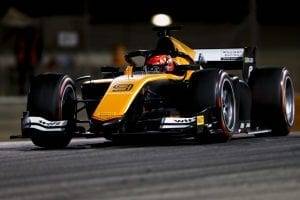