Campos are ready for the Monaco Grand Prix challenge in the second round of the Formula 2 Championship.

The drivers and the team are looking forward to racing around the principality after the Covid-19 pandemic caused last years event to get cancelled.

Both Ralph Boschung and Gianluca Petecof are expecting to have a strong weekend for Campos. Boschung has a lot of experience racer around the Monaco streets but suffered in Bahrain with engine issues which ruined his chances before they could be solved.

On the other hand, Petecof had a positive debut in Sakhir with clear and solid progress throughout the weekend. During the Barcelona testing, both drivers finished in the top five, which is an excellent prospect ahead of Monaco.

Adrian Campos, Sporting Director of Campos Racing, said: “Monaco is an event marked in red on the calendar because it’s different from almost everything else; it doesn’t matter if you are a team or a driver. It has its own personality, an almost unchallenged racing history, and that’s why this is a very special weekend throughout the season. Traditionally we performed well in Monaco, so we expect to complete a strong weekend and bring some good results home.”

Boschung said, “I’m really looking forward to Monaco because it’s such a special place and a track with a very charming atmosphere. It’s one of the toughest circuits on the calendar but, at the same time, most enjoyable of the year.”

Petecof said: “It’s a very special race coming up. The Monaco Grand Prix will be my first street race ever. It will be a special occasion to make my debut with a Formula 2 car. Monaco is quite different in comparison with the rest on the calendar. Qualifying will be more important than ever. Besides, I think it will be challenging from a mental point of view for everybody. We must focus on our job, and maybe at the end of the week, we could hit the jackpot and score some points.”

Monaco is a legend of its own with famous bends like Sainte Devote, Mirabeau, Tabac or La Rascasse. On the tyre front, Monaco is the least abrasive circuit on the calendar, but tyre compounds play an important role to guarantee excellent mechanical grip.

There is also little room for mistakes for the Campos pair with very little run-off around the street track. A small error, and the car could be straight in the wall.

The Campos pair will be ready to hit the track in the slightly different timetable for Monaco, with practice and qualifying taking place on Thursday instead of Friday. The qualifying split into two groups to reduce overcrowding on track. 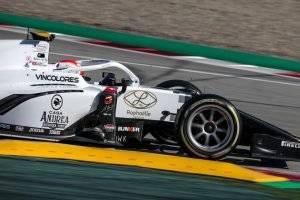