Campos Racing achieved a top-five finish and scored points-paying results twice in Baku in the third round of the 2021 FIA Formula 2 championship.

Swiss driver Ralph Boschung finished fifth and sixth in the streets of Baku, while Italian Matteo Nannini showed excellent pace on his debut with the team.

Boschung completed another strong weekend, making it back into the points twice. A mistake from another driver being the reason he was out of the points in the second Sprint Race.

Nannini, back in Formula 2 after missing Monaco, made a promising start for Campos in Baku and showed an impressive performance during the second Sprint Race.

Sprint Race 1 had a couple of incidents on the first lap, which bought out the safety car. Boschung, who started fourth on the reverse grid, struggled slightly on the dirty side of the grid, dropping down to fifth.

However, the Swiss driver slipped further down the order but still managed to reclaim sixth on the penultimate lap. Boschung got past Marcus Armstrong to claim four valuable points. Meanwhile, Nannini showed good pace and finished 15th.

The second Sprint Race wasn’t as positive for Boschung, who was forced to retire after being hit from behind.

Fortunately for Campos, Nannini showed his talent once again. He avoided the crashes and incidents on the first lap and quickly moved into the top 10.

The young Italian spent his race fighting with Theo Pourchaire, Oscar Piastri and Jack Aitken to finish the race a few places shy of the points in 11th.

The Feature Race wasn’t as lucky for Nannini, who couldn’t get off the line due to late technical issues.

Boschung managed to avoid a clash at the first left-hander to gain two positions. The Swiss driver got involved in a couple of battles and nursed his tyres home to finish fifth, his best result in an F2 Feature Race.

Adrian Campos-Suner Torres, Campos Racing’s Sporting Director, said: “We are delighted to continue the clearly ascending the ranks in the FIA Formula 2 and after another promising weekend in Monaco.

“Ralph delivered a very solid race on Sunday, but it was bitter as Matteo couldn’t even make the start today.

“Paying attention to his rapid improvement over the weekend, I have no doubts he could have made it into the top ten.”

Boschung currently sits tenth in the drivers’ championship with 36 points.

Due to them scoring points twice, Campos now sit sixth in the teams’ standings.

The Spanish-based team will have a break before Silverstone for Round 4 in the middle of July. 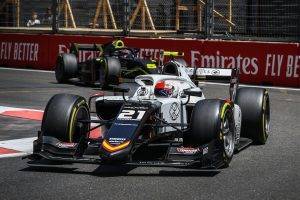