Despite a promising qualifying, Campos suffered from tyre wear and degradation and left Barcelona with no extra points for the championship.

Campos had a hard weekend at its home track. Heavy tyre degradation was an issue for everyone in Barcelona, and Campos failed to repeat another podium result.

Both Aitken and Samaia chose to start the Feature Race on the soft tyres in race one. Jack Aitken, who started in seventh, moved up to sixth before making his mandatory pit stop on lap six for the hard tyres, while Guilherme Samaia pitted three laps later than his teammate for the same tyres.

The question was whether a second pit stop would be necessary or not. Aitken had solid pace in his second stint while still saving his tyres for the closing stages.

Two safety cars were deployed, which changed the dynamic of the race, the second came out with just a few laps left. Aitken had moved up to sixth, but a frantic lap which involved contact with Sean Gelael ruined the Brit’s chances at taking the checkered flag. Meanwhile, Samaia, who was hit by Roy Nissany, ended up in 16th.

There was another chance to shine on Sunday with the Sprint Race. Aitken managed to gain three places in the opening lap. He tried to save his tyres for the end of the race but, like Samaia, struggled to do so while running nose-to-tail with 15 other cars.

Aitken went for a pitstop on lap 16 and, while his lap time came down, couldn’t pull a late charge through the field and the Anglo-Korean finished in 18th. Samaia ended the second race down in 20th.

On Twitter Aitken said: “This series man, it’s a trip. Took a bit of a gamble on pitting, hoping for a SC to bunch it up again, but it never came. Mega thanks for all the support recently, and @camposracing for pushing every day.”

With a weeks’ break, Campos will head to Belgium for more Formula 2 action. 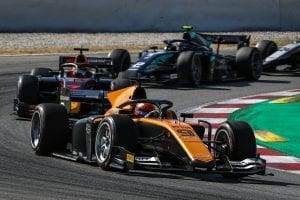