Among the five Red Bull Junior Team drivers in the FIA Formula 2 Championship, the young Japanese rookie driver Ayumu Iwasa earned the bragging rights on Sunday in Imola after his P5 finish.

In what turned out to be a frantic race, Iwasa placed highest among the Red Bull Junior Team drivers in Sunday’s Feature Race and showed incredible pace all weekend.

Pipped to pole by Juri Vips, the Japanese driver navigated the difficult conditions to line up second for the Feature Race.

“I could improve in Quali and had a good session, put in a good lap at the end for P2. The car was very very good and gave me good confidence. Very positive. It was my first time to drive with the rain tyre in F2 but I managed to adjust to it.”

Lining up P9 for Saturday’s Sprint Race, Iwasa held onto his position until the end of the race, claiming a top ten finish, but no points.

Throughout the Sprint Race, he was hot on the tail of his fellow Red Bull Junior Team driver Liam Lawson in the Carlin, but a mistake at Variante Alta meant that he missed out on a points finish.

“In the Sprint Race I didn’t have a good pace from the beginning and I also made a big mistake at the start and I think I lost 4 positions. I didn’t have enough speed and lost another position.

“But after that I found a good pace but it is difficult to overtake on this track. Always a DRS train. But the car was quick and my driving came good during the race. So I improved after the beginning.”

On Sunday however, the DAMS driver drove an extremely mature race. Losing two places in the start, he quickly regained his composure and soon roared his way through the field.

“In the Feature Race I made a mistake at the start and was overtaken by 2 cars. Then I had a very very good pace with the Super Soft, even though I have never used it before in F2. So that was very positive.”

Given that he was one of the few cars running the soft tyres from the start, Iwasa benefitted from the resulting Safety Car caused by Juri Vips crashing out.

“My team went for a double pit stop under the Safety Car. My car was second and we had a problem with the rear tyre and I think I lost about 7 seconds. That left me P8 or 9.”

While Ayumu wanted to finish higher up on the grid, he was happy with the result of his first Imola outing.

“It is a shame, otherwise I could have made P2 or 3 because I had very good pace again on the Medium.

“But I have a lot of positive things, in the car and my driving as well, certainly improving both. So that and the good data we had from the Barcelona test should make for a good weekend when we go back there. Keep focused and do my best.” 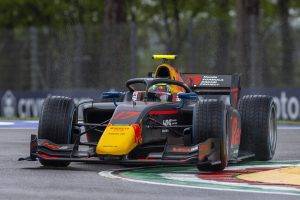